“All of the stories are wonderful, and we're impressed by the creative spark of every single one of these students.” 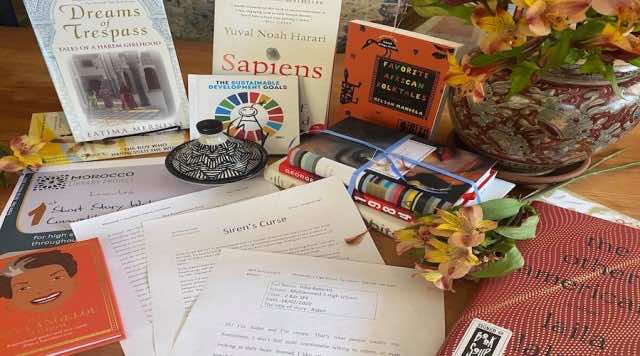 The three winners have each received an Amazon Paperwhite Kindle, and more gifts in the form of books and certificates are on the way.

“It’s always been a dream of mine to encourage young writers here, and it’s a great way to evolve the whole MLP program,” she said.

The organizers said the goal now is to publish an anthology of these 21 stories and put them in the MLP libraries.

“Can you imagine how a student will feel pulling a book off the shelf with their own story in it? I think people in the US and other places will also be interested in what young Moroccans have to say, and in that sense a project like this can encourage friendship and broader understanding across the world,” Mackraz said.

Mackraz added that all the teachers who participated in the competition will also receive a certificate of recognition and a thank-you package of new books for their libraries.

Larbi Arbaoui, the competition’s project manager, said the project is about teaching young learners the art and craft of story writing.

“Our main objective in MLP is to encourage as many students as possible, with the help of their teachers, to write about topics they like, most importantly oral and folk tales in their communities,” Arbaoui told MWN.

Competition judge Mohammed Hassim added that “all of the stories are wonderful, and we’re impressed by the creative spark of every single one of these students.” He encouraged all Moroccan students to “Keep writing!”

Brahim Ait Hssain, Hiba’s teacher, said Hiba is an excellent student who loves writing. Her story is “is an eye-opening and compassionate story told from the perspective of a boy with autism.”

Ikram Lekdaoui of Med V High School in Goulmima came in second place for her tale “The Humanitarian King.”

Her teacher, Zakaria Oumami, told MWN he is very proud of the achievement of his student, who creatively used her imagination and skills to compose the story.

“It is a timely story of two mythical lands in an age of pandemic. One land has wealth and resources; the other does not. Though the two kingdoms were in conflict, after the pandemic broke out, it became a question of humanity not authority.”

Fadoua Elaik from Excellence High School in Guelmim, the youngest among the winners, came third.

According to her teacher, Ayoub Al Idrissi, Fadoua’s “Siren’s Curse,” “is a modern retelling of the Greek myth of the sirens, amid the push and pull of good and evil, of happiness and heartbreak.”

The organizers are determined to make the next competition bigger and will cover more schools all over Morocco.

“Honestly, it’s an honor to be able to support emerging voices, whether it’s their own creative writing or local tales that they’ve collected from elders. We hope to continue this program year after year,” Mackraz said.

She added that this will be possible only with the active participation of teachers to encourage their students to write and Moon Travel Guides, an imprint of Hachette Books, which cosponsored our project by helping Morocco Library Project pay for the books for the libraries and the participants as gifts.