“This is Hagia Sophia breaking away from its captivity chains,” said Erdogan.

Rabat – Hagia Sophia officially opened as a mosque on Friday, hosting thousands of Muslims for prayers for the first time in 86 years, after decades of being classed as a museum.

Turkish President Recep Tayyip Erdogan attended the inaugural prayer on June 24, coinciding with the common Friday prayer for Muslims, along with 500 dignitaries.

Erdogan described the conversion of Hagia Sophia to a place of worship for Muslims as being his “biggest dream” since his youth, reported Anadolu Agency.

Worshippers flocked from across the country to attend the first prayer at Hagia Sophia, filling the mosque as well as the surrounding squares.

Local media report the gathering took place in full adherence with preventive measures against the spread of COVID-19, with Turkish authorities arranging socially-distant prayer spots for the face mask-wearing worshippers.

Turkey decided on July 10 that Hagia Sophia will no longer serve as a tourist attraction but rather regain its historic status as a mosque.

The decision follows a debate that took place on July 2 at the Turkish Council of State concerning whether or not the Hagia Sophia museum should be converted into a mosque.

Pope Francis expressed his sadness over the conversion, saying, “I think of Hagia Sophia, and I am very saddened.”

US Secretary of State Mike Pompeo insisted that Hagia Sophia better serves humanity as a museum by uniting “those of differing faith traditions and cultures.”

“What we do in our country and with our property is up to us,” said Cavusoglu.

The history of Hagia Sophia: In brief

The 6th century Byzantine Emperor Justinian I first constructed the Hagia Sophia as it is known today in Constantinople, now Istanbul, as a church in the year 537.

After the Ottoman conquest of Istanbul in 1453, Sultan Mehmed II converted the church into a mosque for Muslims.

Under the rule of the founding father of modern Turkey, Mustafa Kemal Ataturk, Hagia Sophia was converted once again, this time into a museum in 1934.

Finally, the most recent decision has converted Hagia Sophia back into a mosque under the rule of President Erdogan.

“This is Hagia Sophia breaking away from its captivity chains,” Erdogan said last week, according to Turkish media.

“It was the yearning of our people and it has been accomplished.” 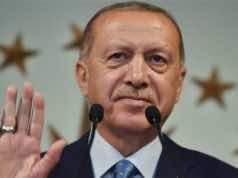