The rankings are based on celebrities who endorsed the brands, social media followers, revenues, and growth rates, among other criteria. Salwa Idrissi Akhannouch, owner of the Yan&One cosmetics brand, appeared sixth on the list. Meanwhile, Mouna Abbassy, founder of the IZIL Beauty brand, earned the 22nd spot on the list.

Salwa Idrissi Akhannouch is the founder and CEO of the Aksal-Morocco Mall Group. The group owns 50% of Morocco Mall in Casablanca, the second-largest shopping center in Africa.

The achievement that earned Salwa Idrissi a spot on Forbes’ list, however, is the cosmetics brand Yan&One she launched in 2017.

Salwa Idrissi inherited much of her fortune from her grandfather, Haj Ahmed Benlafkih, one of the biggest tea merchants in Morocco in the 1960s. She is also the wife of Aziz Akhannouch, Morocco’s richest man and minister of agriculture. Forbes magazine estimates Akhannouch’s net worth at $3.4 billion.

The second Moroccan woman to feature on Forbes’ list, Mouna Abbassy, launched her cosmetics business IZIL Beauty in 2013. Abbassy based her business in Dubai, the UAE.

After launching her brand, the Moroccan entrepreneur took an executive course in cosmetology in London in order to develop her own products.

“This goal was realized when the construction of the company’s advanced cosmetics factory in Ras Al Khaimah, [UAE], was inaugurated in 2019,” Forbes Middle East wrote.

Before venturing into entrepreneurship, Abbassy worked for 10 years as a marketing professional for multinational cosmetics brands in the UAE.

IZIL Beauty — meaning “pure” in Tamazight (Berber language) — is a brand that focuses on modernizing traditional Moroccan beauty rituals. Many of its products are based on Argan oil, as well as other materials imported from Morocco.

The top 10 includes four entrepreneurs from Lebanon and two from Egypt, while the rest are from Iraq, Palestine, Morocco, and Saudi Arabia.

Forbes Middle East based the ranking on several factors. The criteria include celebrities who endorsed the businesswomen’s brands and the number of countries the brands are present in.

The ranking also considers the brand’s social media followers, revenues, and growth rates, as well as media coverage and years of experience.

For tech brands, the amount of external funding received is another factor in the ranking. 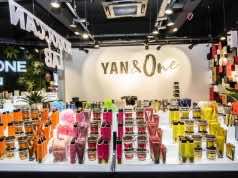