In June, Spanish radio stations reported that multiple FC Barcelona players and staff members contracted the virus, but neither the club nor La Liga confirmed the news.

The player underwent a PCR test on Tuesday and is now isolated at his home. FC Barcelona said the player shows no COVID-19 symptoms and is in good health.

One positive case of Covid-19 among the nine players starting the preseason. https://t.co/8wtNikt2mZ

Although FC Barcelona did not reveal the identity of the player, the Catalan club declared on Monday that nine players have been tested for COVID-19.

FC Barcelona also reassured fans by affirming that the player has not been in contact with members of the first team.

The Spanish club’s next match is set to take place on Friday, August 14, against Germany’s Bayern Munich in the Portuguese capital of Lisbon. The match is part of the quarter-finals of the European UEFA Champions League.

FC Barcelona will have the match in Lisbon behind closed doors due to COVID-19. The decision is in line with UEFA’s reform to the competition system.

The five members who caught the virus have since recovered. The patients included two coaches, according to the “Tu Diras” radio program.

However, neither FC Barcelona nor La Liga confirmed or denied the radio stations’ reports.

Several well-known football players and figures around the world have tested positive for COVID-19 and recovered. 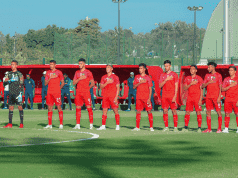