The awareness campaign will target South Africa and its neighboring countries.

Rabat – The Moroccan Embassy in Pretoria, South Africa, has announced the launch of an awareness campaign on Western Sahara to tackle the “many illusions about the Moroccan Sahara conflict.”

The embassy titled the campaign, announced on Thursday, August 13, “Between myth and reality: Understanding the regional dispute created around the Moroccan Sahara.”

The campaign includes a series of eight “short, entertaining, and colorful” videos, produced in English, presenting answers to frequently asked questions about the Western Sahara dispute.

The embassy took the answers from an interview between the Moroccan Ambassador to South Africa, Youssef Amrani, and South African journalist Janice Greaver.

The videos tackle the Western Sahara conflict from historical, political, and legal points of view.

According to the embassy, the videos discuss the topic in all of its dimensions in an authentic manner.

“These video sequences intend to shed a light on the fundamentals of the Kingdom’s diplomacy and the constants of its doctrine in matters of foreign policy,” said a press release.

The structural logic of the campaign allows to “deconstruct in a reasoned way the fallacious allegations that surround the regional dispute,” the embassy added.

The campaign came in response to the allegations that “certain parties” are spreading about Western Sahara, the diplomatic mission to South Africa explained.

The videos highlight the “historical facts of the case, the constructive commitments of the Kingdom, and the failings of certain third parties directly involved in the issue of the Moroccan Sahara.”

The Moroccan Embassy in South Africa is set to distribute the videos on digital platforms and social networks in South Africa and its neighboring countries, the press release concluded.

South Africa has long been a major African supporter of the separatist Polisario Front. However, over the past two years, the Moroccan Embassy in South Africa has intensified its efforts to fight misinformation on the Western Sahara conflict and work on bilateral cooperation.

Since his appointment in South Africa in October 2019, Amrani made several appearances on local television channels. In most of his appearances, the Moroccan diplomat highlighted how cooperation between Morocco and South Africa can lead the whole continent into a new era of development. 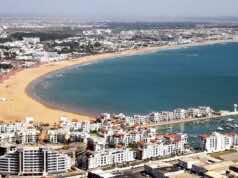