Currently, Morocco's blood reserves are sufficient for only 3 or 4 days. Rabat – Blood banks in Morocco are at a critical low, despite recent drives to boost reserves.

Currently reserves in Morocco are only enough to cover the next three or four days, Khadija Al-Hajjuji, Director of the National Center for Blood Transfusion and Hematology (CNTSH), told 2M.

Blood donation centers saw fewer numbers as the COVID-19 pandemic began to spread in Morocco, and storage in blood banks took a nosedive. Potential donors stayed quarantined in their houses, while the virus may have caused a fear of visiting medical facilities among the public.

As the virus continues to spread, reserves struggle to meet quota.

The summer holiday has increased the critical shortage. From the end of July and the end of August, the deficit has been most notable. While COVID-19 is the setback at the forefront of the shortage, other factors affect the summer holiday slow down, Al-Hajjuji told 2M.

During this period regular donors may be vacationing, Al-Hajjuji explained. Another issue worsening the deficit is increased traffic during holiday periods, when hospitals draw more blood from the banks to treat victims of traffic accidents.

There have been recent successful blood drive campaigns around the country, such as in Nador and Errachidia. However, the health ministry continues to urge Morrcans to donate their blood.

Dr. Mohamed Benajiba, director of the National Center for Blood Transfusion (CNTS), called for a national blood drive on March 24.

Levels at blood banks in Morocco

Morocco’s blood banks currently hold 1,250 bags, said Al-Hajjuju to 2M. That equates to a mere three or four days’ worth of supplies.

The deficit level is prevalent in major cities—mainly Casablanca, then Rabat, Tangier, Marrakech, and Fez. Al Hajjuji- noted that each of these cities each house university hospitals which require larger supplies to meet the demands of daily patients.

The World Health Organization (WHO) recommends countries retain a blood store of 1% of the population, which would equate to enough stock for at least seven days.

“In 2019, there were 334,510 blood donors in Morocco, or 0.99% of the population, which put us on track to achieve the one percent of the population recommended by the World Health Organization,” Al-Hajjuji said to 2M. “But due to the current conditions in our country, I believe that this year the proportion will decline.”

In order to sustain daily needs, blood banks across Morocco require 800 to 1,000 blood donors per day, according to Al-Hajjuji. Morocco saw as few as 200 donations per day at the start of the pandemic.

Al-Hajjuji says she believes the COVID-19 “pandemic has certainly had a negative impact on the blood donation process, creating some fear among donors.”

Dr. Benajiba assured the public that centers have taken the necessary precautions to protect everyone involved from COVID-19. “The National Center for Blood Transfusion has taken measures to ensure the complete safety of donors,” he said in a March 24 call to increase blood donations.

Al-Hajjuji urges the people of Morocco to do their part and replenish the supply of national blood banks. “Blood is a vital resource, and only humans have the capability to supply it.” 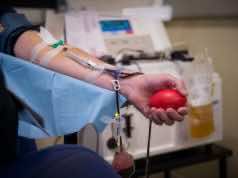