The oasis is an important tourist destination for the region and source of income for many local residents.

Rabat – A fire ravaged the oasis of Tighmert on Tuesday in the southern Moroccan province of Guelmim, causing material damage and killing many livestock.

The oasis is located 10 kilometers from Guelmim in the rural town of Asrir. The oasis is an important tourist destination for the region, as well as a key source of local income and agriculture.

Local authorities told Morocco’s state media that the fire began at midday in the oasis as temperatures in Guelmim reached 47 degrees Celsius.

Morocco’s Civil Protection elements of Guelmim and Sidi Ifni intervened and managed to control the oasis fire starting at 8 p.m.

In addition, a Civil Protection plane from Agadir contributed to the fire-fighting efforts.

With the successive heatwaves that hit Morocco recently, areas with vegetation are more exposed to the danger of wildfires.

In a red-level meteorological bulletin on Tuesday, Morocco’s General Directorate of Meteorology (DGM) announced that the temperature will reach up to 49 degrees Celsius in some provinces, including Guelmim, through Thursday.

DGM also warned about warm sirocco winds, known in Morocco as “chergui,” another factor that adds to the risk of wildfires.

Hot weather also sparked oasis fires last summer, notably in the south-eastern province of Errachidia. The fire destroyed over 2,540 palm trees and 1,500 olive trees in an oasis in the valley of Ziz. Joint efforts by locals and officials helped curb the spread of the fire.

The southern provinces are not the only Moroccan regions exposed to the danger of wildfires. The Haouz al Mellaliyin forest in M’diq, northern Morocco, has recently seen severe fires that destroyed more than 1,000 hectares of vegetation.

The forest fire broke out on August 1. Over five days, 850 locals, members of the High Commission for Water and Forests, the Auxiliary Forces, the Gendarmes, the Royal Army, and the Civilian Protection Forces fought to bring the flames under control. 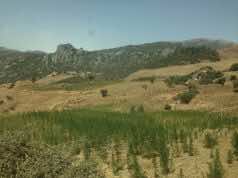