Morocco would have to compete with the Netherlands, France, England, Spain, and Cote d’Ivoire to attract a new generation of talented players. 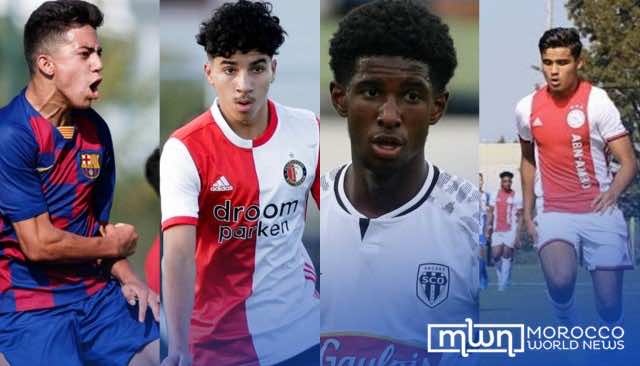 Rabat – The technical staff at the Moroccan Royal Football Federation (FRMF) has put its visor on four young Moroccans born in Europe, with the aim of recruiting them for the Atlas Lions squad.

With several cornerstones of the Moroccan national squad nearing retirement, such as Nabil Dirar and Nordin Amrabat, or already internationally-retired, such as Mbark Boussoufa and Medhi Benatia, the FRMF is looking for young talents to constitute the next generation of the Atlas Lions.

According to a local news report, the FRMF is scouting four players still in their teenage years. The Moroccan federation’s mission, however, will not be easy, as the players have more than one nationality and therefore the right to play for other national teams.

The first name on the FRMF’s list is Mohamed Hammouchi, currently playing for the youth squad of Dutch club Ajax Amsterdam. The young striker, born in January 2005, has scored 15 goals and made 11 assists in the 2019-2020 season.

In addition to his Moroccan roots, Hammouchi has Dutch and Ecuadorian nationality. However, a local report citing sources from the FRMF said the player has already agreed to wear Morocco’s colors. If the rumors prove true, the 15-year-old player could be a pillar of the Atlas Lions’ U17 squad in the upcoming 2021 African Cup of Nations.

The second player that sparked the interest of Morocco’s football scouts is Salah Eddine Oulad M’hand. The 17-year-old player recently joined the U18 squad of English giant Arsenal after playing for the various youth teams of Dutch club Feyenoord.

The Dutch football federation KNVB is closely monitoring Oulad M’hand’s evolution. The attacking midfielder could be a new source of contention between the FRMF and the KNVB, similar to Dutch-Moroccan player Mohamed Ihatarren who decided to play for the Netherlands in November 2019.

Oulad M’hand has previously played for the Netherlands’ U17 squad. However, he still has the legal right to switch his allegiance to Morocco. It remains to be seen whether the FRMF will convince him to represent the Atlas Lions.

The third player on the FRMF’s list is Mohamed-Ali Cho. The 16-year-old player made his professional debut in the French league on Sunday, making him one of the youngest players to play with senior clubs.

Cho was born in 2004 in France to an Ivorian father and a Moroccan mother. His family then moved to England, giving Cho the right to represent four national teams: Morocco, Cote d’Ivoire, France, and England.

The young striker played for the youth squads of English club Everton and French team Paris-Saint-Germain before signing his first professional contract with France’s Angers.

Cho made two appearances for England’s U16 squad in 2019, but can still play for any of the other national teams. With competition from the English, French, and Ivorian football federations, recruiting Cho for the Atlas Lions will certainly be difficult.

The last player Moroccan scouts are courting is 16-year-old Ilias Akhomach, nicknamed the “Moroccan Messi.” The player signed his first professional contract with FC Barcelona’s U18 squad in July.

Born to Moroccan parents in a town near Barcelona, Akhomach went through FC Barcelona’s prestigious football academy, known as La Masia. Despite his young age, the Moroccan-Spanish player sparked the interest of several European clubs.

After signing his first contract with FC Barcelona, Akhomach shared photos with his family and wrote “Alhamdulillah (Thank God),” with some interpreting this as acknowledging his Moroccan origins. The player has already made appearances for the Spanish U16 squad. However, the door remains open for him to join the Atlas Lions.