The loan will allow Tunisian cheese maker Land’Or to open its first production unit in Morocco.

Rabat – The European Bank for Reconstruction and Development (EBRD) has loaned the Moroccan subsidiary of Tunisian cheese maker Land’Or €7.8 million ($9.2 million) to expand in Morocco.

The bank announced the loan in a press release on Wednesday, September 2.

EBRD’s investment will finance the acquisition and equipment of a new cheese manufacturing plant in Kenitra, near Rabat.

The production unit is expected to be operational by the end of 2021 and will have a production capacity of 2,700 tonnes of processed cheese per year.

The factory is also set to produce new packaging with the aim of increasing Morocco’s export potential for cheese.

The cheese factory is also set to benefit from a grant through EBRD’s Value Chain Competitiveness Programme. The initiative aims to improve value chains at production units and make businesses more competitive across the southern and eastern Mediterranean region.

Land’Or expressed its wish to expand in Morocco in June 2019, when the company’s CEO, Hatem Denguizli, announced an investment of €5.2 million ($6.1 million) to build a plant in Kenitra.

Morocco’s Minister of Industry, Moulay Hafid Elalamy, confirmed the deal in March 2020, after signing an investment contract with Land’Or’s CEO.

The new factory will serve the Moroccan market without the need to import products from Tunisia. In 2019, Morocco’s imports represented 28% of Land’Or’s turnover.

EBRD’s loan is part of a series of agreements aiming to finance private sector companies in Morocco.

According to EBRD’s recent press release, the bank has so far invested nearly €2.5 billion ($2.9 billion) in Morocco through 66 different projects. 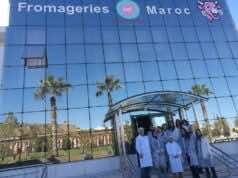