High temperatures ranging between 40 and 44 degrees Celsius will affect several other regions on Monday and Tuesday.

The showers will continue until Monday at 3 a.m. and hit the regions of Ouarzazate, Zagora, Errachidia, Aousserd, Oued Ed-Dahab, and the interior of Boujdour.

Wind gusts, thunderstorms, and hail will accompany the rain showers in some areas.

Rain and Snow Return to Morocco Over the Weekend 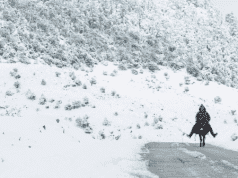 Bundle up: Cold Weather to Persist in Morocco Friday