The tragic story of the rape and murder of 11-year-old Adnane has shocked Moroccans and caused a national uproar. 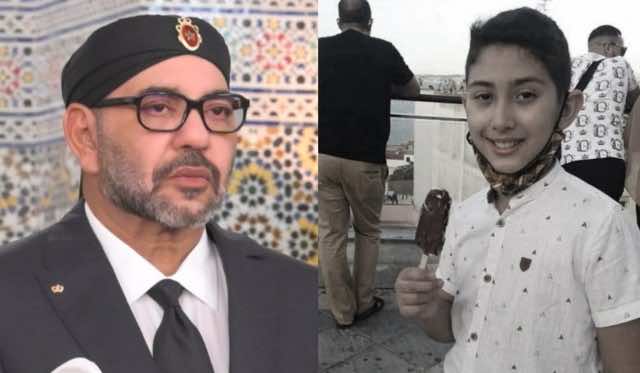 Rabat – King Mohammed VI sent Monday a message of condolences to the family of Adnane Bouchouf, the 11-year-old boy who was kidnapped, raped, and killed in Tangier last week.

In his message, the King condemned the brutal murder of the child and offered his compassion and condolences to the victim’s family.

King Mohammed VI also implored God to welcome the child into heaven and grant him mercy.

The message conveys the King’s wishes for Adnane’s parents and family to have patience and comfort, as well.

The rape and murder incident that shocked Moroccans occurred last Monday, September 7. However, security services in Tangier only managed to find the missing child on Friday night, September 11.

Adnane Bouchouf disappeared on Monday after his parents sent him to purchase medicine from a nearby pharmacy. A street camera footage showed the boy walking with a stranger before his disappearance.

After security services identified and found the suspect who appeared on the video, it was already too late.

The 24-year-old suspect had lured the child to his apartment, raped him, killed him, and then buried him in a nearby garden on the same day.

Hundreds of thousands of Moroccans expressed their outrage at the incident, calling for a death penalty against the criminal. An online petition demanding the suspect’s execution has collected over 650,000 signatures as of September 14.

However, not all Moroccans agree with death sentences. One day after police discovered the murder of Adnane Bouchouf, Moroccan activist Ahmed Assid sparked controversy when he said Moroccans calling for the death penalty are “no less brutal than the monster they want revenge against.”

According to Assid, the execution demands only show the “extent of anger and violence” inside Moroccans and does not solve the problem.

The controversial statement opened the door of debate among Moroccan public figures. Responding to Assid, the Imam of the Hassan II Mosque in Casablanca, Omar Al Kazabri, defended the death sentence, saying it is a fitting punishment for the crimes committed against Adnane.

While the public debate will likely have no direct impact on the course of justice, Morocco’s penal code is on the side of pro-death penalty Moroccans.

However, while capital punishment remains legal on paper, the last execution in Morocco dates back to 1993. In practice, a death sentence is life imprisonment.

The trial for Adnane’s murder began Monday at Tangier’s Court of Appeal. The trial is expected to extend — as is usually the case in murder investigations — over several weeks, if not months, before the victim’s parents and countrymen can hear the court’s final decision.