This is not the first time a Moroccan prison has faced accusations of misconduct against inmates.

Rabat – The administration of the Bourkaiz prison in Fez denied in a statement on Friday the rumored involvement of staff members in the death of an inmate.

The prison’s administration indicated that accusations against its employees are baseless, noting that the inmate died following a fight with another prisoner in the same cell.

Following the altercation, the late prisoner fainted. Staff members intervened to transfer him to the infirmary to provide him with first aid. They then transferred him to an outpatient hospital, where he died.

The Fez prison immediately informed the prosecutor’s office, which opened an investigation into the circumstances of the death.

This is not the first time a Moroccan prison has faced accusations of misconduct against inmates. However, Moroccan penitentiaries are quick to respond when such concerns arise.

On September 5, the local Oudaya prison in Marrakech denied claims that three Tunisian women in detention do not enjoy their full rights.

Morocco’s security services had convicted the three women for their links to an international drug trafficking network.

The September 5 statement came in response to “information reported by certain electronic sites.” The prison refuted the claims, saying the detainees had not complained about the conditions of their confinement.

Following his release on July 20, El Mahdaoui gave interviews to Moroccan news outlets claiming that several prisoners were subject to torture, among other rights abuses.

The journalist criticized the living conditions of inmates, claiming medical care and food services were substandard.

The General Delegation for Prison Administration and Reintegration (DGAPR) refuted El Mahdaoui’s allegations, describing them as “unfounded” and “irresponsible.” 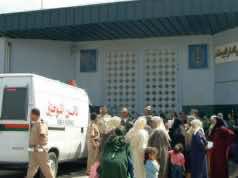