The G20’s pandemic-driven debt suspension program is set to expire at the end of this year.

Rabat – Finance ministers of the Group of Seven (G7) will support an extension to a temporary debt freeze for economically struggling nations, according to a joint statement released today. At a virtual meeting of the G7 on Friday, finance ministers voted to support the continuation of a G20 debt moratorium that was set to expire at the end of the year.

The program is part of the G20 Debt Service Suspension Initiative (DSSI), approved in April. It aims to help poor countries postpone debt payments while they face the COVID-19 pandemic. The International Monetary Fund (IMF) has urged extending the program for a full year.

The G7’s statement admitted that the program was not able to support as many countries as intended. The temporary freeze currently concerns 43 countries who are able to defer $5 billion in debt payments. The DSSI program initially aimed to help 70 eligible countries and postpone $12 billion in debt repayments.

The statement indirectly chided China for allegedly classifying some of its state-backed lenders as private entities in order to make its lending less transparent. Despite this, the G7 urged the G20 to approve the extension of the DSSI on October 14, when finance ministers of the group are set to meet.

The G7 finance ministers said the debt freeze is part of “the G20’s commitment to transparency and creditor coordination, including an understanding on key features for debt treatment beyond the DSSI.”

The finance ministers of the G7 recognized that another temporary debt freeze is unlikely to impact the long-term problem of debt servicing for poor nations. The statement said that “countries will need further debt treatment” in order to “restore debt sustainability.”

The phrase debt sustainability sounds abstract, yet it references a very real looming global debt crisis. Around the world countries are facing the economic consequences of the pandemic. With no end in sight, the crisis is making it increasingly likely that countries will struggle to pay off their national debts.

The debt crisis existed before COVID-19, but the pandemic has further exacerbated the challenge. Every year poor countries transfer billions of dollars in debt repayments to international lenders.

In an era that needs strong state investments in healthcare and economic stimulus, these debt payments could become a handicap for many countries across the globe. To prevent this, permanent debt relief or voluntary debt buybacks could help relieve these unsustainable debts, but internal creditors, who these countries owe, oppose such initiatives. 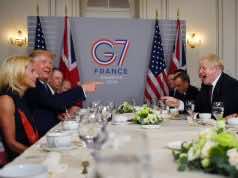 The Blond Breakfast: Trump and Boris Johnson Meet at G7 in France