Various Malian figures expressed their appreciation for Morocco’s concern for their country. 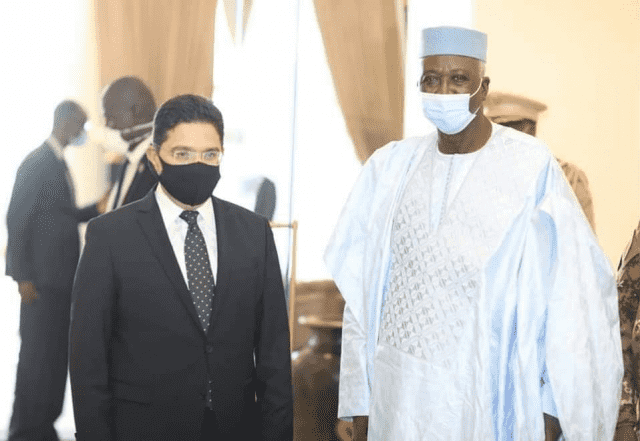 Rabat – Morocco’s Minister of Foreign Affairs Nasser Bourita visited on Tuesday Bamako, the capital of Mali, to share a message of encouragement, friendship, and solidarity with the Malian people and authorities.

The transitional President of Mali, Ba N’Daou, received the Moroccan official, who carried out the visit under the instructions of King Mohammed VI.

Bourita carried a message of “encouragement in relation to all the important actions that have been taken to place Mali on the path of a peaceful transition, promising and making it possible to build the Mali of tomorrow,” according to Morocco’s state media.

Bourita stressed that Morocco maintains its availability to accompany Mali during the transition phase, which marks the country’s “modern history.”

The Moroccan diplomat emphasized that Morocco has always put the interests of the Malian people above all circumstances and political contexts. Morocco, with the guidance of King Mohammed VI, is ready to support the priorities and programs that Malian authorities will define during the transition period.

In addition, Bourita said the Moroccan message of friendship comes to encourage all the Malians who are working to ensure the success of the post-coup transition, as well as the external forces with influence in the country aiming to help facilitate a successful civil transition.

Morocco made clear its confidence in Mali, with Bourita calling for a domestic handling of affairs without international intervention. “The Malian genius has proved that it is capable of asserting the supreme interests of Mali on all other considerations,” he said.

The Moroccan minister expressed his faith in the Malian genius and the commitment of transition authorities, commending the mobilization of all active forces as Mali emerges from the August 18 bloodless coup.

The officials all expressed their thanks to Morocco and King Mohammed VI for his permanent concern with the Malian people, according to Morocco’s state media.

For his part, Imam Dicko, a leading religious authority in Mali, said Morocco’s support for the country follows a long history that unites the two nations. Cooperation with Morocco is not recent but rather dates back to Mali’s independence, the imam stressed.

Dicko highlighted Morocco as the first country to come to the aid of Mali after the coup last month.

The imam called for the consolidation of the two countries’ historic links, noting that Bourita’s visit to Bamako “translates, in reality, all the sympathy and the friendship towards the Malian people, and especially what the Commander of the Faithful His Majesty King Mohammed VI represents for Mali.”

Malian religious chief Bouye Haidara also expressed his appreciation for the quality of relations between Morocco and Mali and the sympathy between the two people since Mali’s independence.

“These links have taken root since the reign of the late His Majesty Mohammed V,” said Haidara.

Morocco has adopted an active role in promoting the stability of Mali since the military coup and was the first country to diplomatically engage with the country’s new leadership.

Morocco and Mali maintain a close partnership, particularly on issues of regional security and migration. Mali’s stability is essential in efforts to combat the scourge of terrorism and extremism in the Sahel.