The training hub will be the first of its kind in Africa. 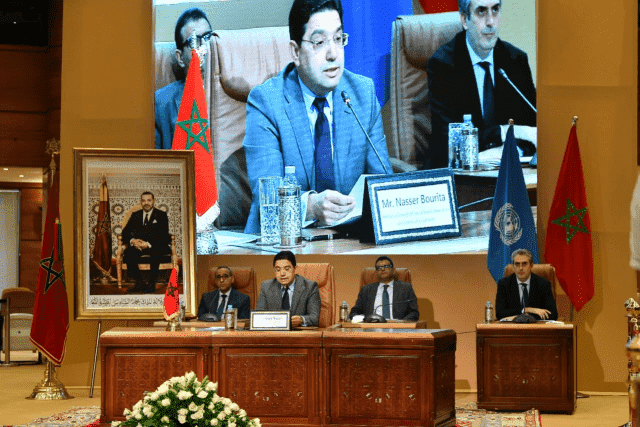 By Taha Mebtoul and Perri Huggins

The new office in Rabat, the first of its kind on the African continent, will serve as a training hub on counter-terrorism, law enforcement, border security management, preventing the presence of radicals, and ensuring respect for human rights in the fight against terrorism.

Morocco’s Foreign Minister Nasser Bourita and the UNOCT Deputy Secretary General for the fight against terrorism, Vladimir Voronkov, signed the agreement during a videoconference ceremony on Tuesday.

Bourita said that the initiative is the result of nine months of tireless efforts at a time when African experienced an “alarming” surge in terrorist activity.

Since the January visit, the region has witnessed an increase in terrorism. Bourita pointed to a 26% increase in deaths due to terrorism in the first six months of 2020 (12,507 deaths) compared to the same period in 2019 (9,944).

With regional terror threats on the rise, the UNOCT representative said today that setting up the program office in Rabat is a natural step in countering terrorism in Africa, citing the leading role that Morocco plays in fighting terrorism across the continent.

With an initial focus on the Sahel, the training hub “will benefit from Morocco’s track record in combating terrorism through international cooperation and information sharing,” according to a UNOCT statement.

Morocco is actively engaged in several security partnerships to combat terror threats in the region. The UNOCT office will allow Morocco to share its experiences with other African states, advancing the country’s aim to strengthen South-South cooperation on the challenge.

Bourita stressed that the office’s actions must be in harmony with the needs and complementary initiatives of African countries, in a “cooperative and united” approach.

Morocco as a model of stability

Morocco’s foreign minister celebrated the agreement as evidence of the country’s role as a beacon of stability at both the regional and continental levels.

The establishment of a UNOCT office in Rabat is “a recognition of the global and multidimensional approach” Morocco has enacted in the fight against terrorism, the Moroccan diplomat said.

Morocco’s preventive approach targets the religious, social, and economic factors that contribute to terrorism in Africa. One of the country’s notable programs includes the training of imams from sub-Saharan Africa, which has helped combat religious extremism in the Sahel.

The UNOCT office is set to add to Morocco’s efforts and enhance the capacity of member states by developing national training programs in the fight against terrorism. Bourita stressed Morocco’s commitment to create a dynamic training portfolio that can meet the equally dynamic and growing threat of terrorism.

Voronkov sees the office not only as a field representation, but also as an extension of the UN in Morocco in counter-terrorism, noting that this “very innovative” structure will encourage countries around the world in the future.

Beyond countering threats in the Sahel, the UN deputy indicated that the office in Morocco will also be responsible for coordinating counter-terrorism activities in Sub-Saharan Africa, which is also a “source of concern due to the very rapid spread of terrorism.”