The 2020 annual UN Secretary-General report on the situation in Western Sahara has listed a series of violations by the separatist Polisario Front.

The UN published the report by Secretary-General Antonio Guterres on October 7.  The document reports 53 violations by the Polisario Front, including 13 general violations and 40 violations against the freedom of movement, between September 1, 2019, and August 31, 2020.

Violations against freedom of movement

According to Guterres, cooperation between the Polisario Front and the UN Mission in Western Sahara (MINURSO) has significantly deteriorated over the past year.

Polisario “regularly denied MINURSO patrols entry into most of their units, as well as to specific areas and sites in the second and fifth military regions, in repeated violation of Military Agreement No. 1,” the report said.

Military Agreement No. 1, established in 1997, regulates MINURSO’s activities relating to the monitoring of the ceasefire between the Moroccan Royal Armed Forces (FAR) and the Polisario Front. The agreement divides Western Sahara into five areas, including a buffer strip, two restricted areas, and two areas of limited restriction.

The report presented several examples of the Polisario Front’s violations of the freedom of movement against MINURSO.

“On one occasion, a team from the Mine Action Service was denied access to a site in Bir Lahlou and ordered to leave the area while conducting route clearance for MINURSO ground patrols,” Guterres said.

According to the report, Polisario used COVID-19 social distancing measures to justify its blocking of MINURSO from inspecting military sites.

Another excuse was Polisario’s claim that MINURSO observers have the right to “visit, but not inspect,” military sites.

In addition to the violations against freedom of movement, the UN secretary-general, citing the MINURSO, reported “increased incursions by the [Polisario Front] military forces into the buffer strip.”

Polisario’s entry into the demilitarized zone constitutes a violation of Military Agreement No. 1.

“On two occasions, in Agwanit in October 2019 and in Tifariti in May, the evidence was clear, and [the incursions] were declared violations,” the report said.

The Moroccan army has regularly expressed its concern to MINURSO over the Polisario Front’s movement inside the buffer strip, the report said.

“Most of these communications concerned civilian demonstrators gathering in the buffer strip near Bir Lahlou, which the Royal Moroccan Army considers deliberate provocations aimed at raising tensions in this area,” Guterres said.

“Morocco also continued to point out the presence of military personnel accompanying the civilians, in violation of Military Agreement No. 1,” he added.

Other violations MINURSO recorded are Polisario’s relocation of several military units in Tifariti, in December 2019 and in April and May 2020.

The violations include the relocation of one observation post from the restricted area to the buffer strip, “despite repeated requests by MINURSO to move it back to its original location.”

The Polisario Front claimed that the relocation provided a better vantage point for intercepting drug traffickers. The move, however, breaches Military Agreement No. 1.

The UN mission declared four other military construction projects in Bir Lahlou and Tifariti as violations.

Moreover, the report revealed “discrepancies between the order of battle and the number of heavy weapons held by the [Polisario Front] units in Agwanit, Bir Lahlou, and Tifariti in the restricted area.”

MINURSO declared the violations relating to heavy weaponry in January, March, and April 2020 and requested the separatist group to remove the weapons from the restricted area. MINURSO’s requests, however, remained unaddressed.

Finally, the report announced that a “logistics hub consisting of 10 new buildings located inside the restricted area,” which MINURSO declared as a violation in 2017 and included in the list of Polisario’s long-standing violations in 2018, remains operational. 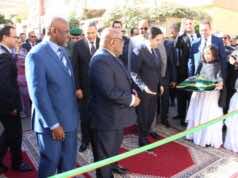