The union is also planning a national march to condemn the lack of response from the government to meet their demands.

The strike will exclude recovery and emergency departments only, Moroccan television channel 2M quoted a press release from the union as saying.

The union will launch the national strike to protest the government’s “incomprehensible” approach to their demands.

The statement also announced the union’s intention to increase doctors’ protests through strikes and national demonstrations in Rabat in front of the Ministry of Health and the Ministry of Finance.

The union said it will release the dates of the planned protests in the near future.

Morocco’s public sector doctors stressed their determination to organize a national march with the participation of physicians from all sectors, including pharmacists, dental surgeons, and others in front of the Parliament building in Rabat.

The union’s vows to escalate calls for protests come amid the COVID-19 crisis, which urged the government to ask doctors in all sectors to mobilize to help the country defeat the pandemic.

Doctors, however, continue to denounce the government’s lack of response regarding their demand.

During the protests, public sector doctors denounced the shortage of medical professionals in Morocco, which caused the suspension of surgical operation in several public hospitals last year.

Last year, the union said Morocco’s health sector suffered deficiencies due to a lack of clear strategy to meet the demands of citizens.

The union also condemned the situation of Moroccan hospitals, many of which do not have the appropriate equipment to deal with the majority of urgent cases.

Since the emergence of COVID-19, some citizens have taken to social networks to denounce the situation of health facilities in Morocco and the lack of equipment.

In August, tension escalated after footage went viral of the Ibn Zohr hospital in Marrakech, showing that the hospital lacks the proper working conditions to ensure the safety of citizens and health professionals amid the COVID-19 crisis.

The situation prompted the Minister of Health, Khalid Ait Taleb, to visit the city to inspect the situation of hospitals in Marrakech.

Marrakech is among the cities that experienced a high number of COVID-19 cases, in addition to Casablanca.

The number of active cases in Morocco reached 22,392. 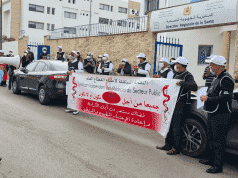