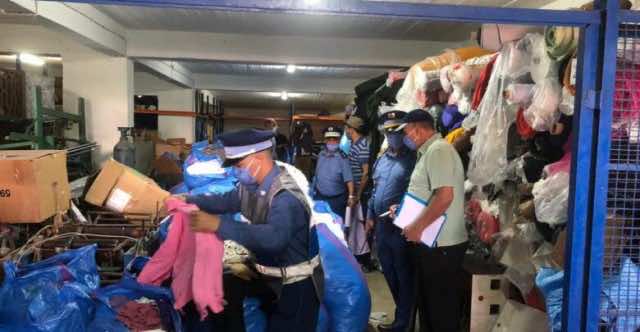 The operation took place over the weekend in collaboration with local police in the Bni Makada district, central Tangier.

The confiscated clothes included ready-to-wear items for men, women, and children, and had an overall value of MAD 1.2 million ($130,500).

In addition to the illegally-imported clothing items, customs seized 3.5 tonnes of untaxed fabric, 1.2 tonnes of plastic packaging bags, and 1.3 tonnes of clothing waste.

The regional commander of the Customs Brigade in Tangier-Tetouan-Al Hoceima, Colonel Abdelkader Battani, said the operation is linked to three other interventions carried out in the past week.

Investigations led Tangier’s customs services to identify and locate a warehouse for storing smuggled clothes. The warehouse is located in the Mghogha district, eastern Tangier, close to the Mghogha industrial zone.

The public prosecutor’s office in Tangier has opened an investigation to identify all the suspects involved in the smuggling operation and dismantle the criminal network.

In a similar operation last week, customs services in Tangier confiscated 28 tonnes of untaxed fabric and 4,670 smuggled clothing items from three different sites. The products have an estimated value of MAD 2.5 million ($271,860).

Tangier, with its well-connected ports, represents a gateway for all types of illegal trafficking activities between Morocco and Europe.