The recent agreement will serve both countries’ security aims and allow Morocco to put a greater focus on its socio-economic development.

By
Andrew Eaddy
-
Andrew Eaddy is a technology investment banker based in New York City.
Oct 12, 2020
Spread the love

In the final months of 2019, the Minister Delegate for the National Defense of Morocco, Abdellatif Loudiyi, shared the country’s goal of creating a sustainable, domestic military industry.

By developing domestic military manufacturing and maintenance capabilities, Morocco will be able to ease the costs of the arms trade and upkeep, which will ostensibly allow the government to allocate funds to more pressing issues in the country.

This move towards military independence aligns with the “five-year plan” Morocco established in 2017 which set out to help the developing nation achieve “regional supremacy” through military improvements by 2022.

By incubating military infrastructure within Morocco, the country will be able to innovate and modernize its military, and with both a growing military budget and its initial $20 billion injection in 2017, Morocco looks certain to achieve its goals.

Morocco’s rise in military investments and increased focus on modernization picked up a great deal at the start of the coronavirus pandemic. A headwind for the defense industry, the impact of the pandemic manifested in falling supply prices due to demand shortages and supply chain disruptions, and Morocco took advantage.

The North African power made several military purchases from France, Spain, and the US between November of 2019 and June of 2020, strengthening all three of Morocco’s military branches and improving the country’s border management capabilities.

Especially as the situation in Western Sahara returns to the fore of conversations surrounding geopolitics and sovereignty claims, and as it has come before the UN Security Council in recent months, border management will be an exceedingly important facet of Morocco’s military apparatus.

As Morocco was making these purchases, the Council of Ministers, chaired by King Mohammed VI, approved a draft decree creating licenses for the establishment of plants to manufacture weapons, ammunition, and security equipment. The decree also stipulated provisions for exports, trade protocol, and transit of the products.

These moves, in tandem with increasing amounts of information sharing with Brazil and the United Kingdom on technology training and explosive weaponry, are strong and clear signs from Morocco that it wants to build out extensive capabilities domestically.

Morocco’s military agreement with the US

On October 2 Morocco signed a 10-year accord with the United States aimed at reaffirming support and enthusiasm for military cooperation between the two countries. Given Morocco’s performance in a number of areas over the last two years, the renewing of bilateral vows makes sense.

Over the last 24 months Morocco has shown great ability to handle not only the mounting threat of terrorism internally and within Africa, but also the coronavirus pandemic, making it a strong partner for the United States.

This, too, resonates, as Morocco was the first country to recognize the United States’ battle for independence in 1777. Furthermore, Morocco and the United States co-host the annual African Lion exercise – a multinational joint force exercise that works to integrate the efforts of the various military forces in Africa.

The positive and collaborative history of this bilateral relationship begs the question, then, why is this recent accord singing so significant? The answer is timing.

What the accord means for US and Moroccan ambitions

Having just passed the half-way mark of the “five-year plan,” and having made significant recent investments in both military barracks and its military knowledge pool, this accord essentially underwrites Morocco’s military ambitions.

It does not underwrite the programs financially, but as Morocco becomes a greater arms exporter and develops its own military industry, its relationship with and tacit “sign-off” from the United States will help to jumpstart business.

A domestic defense industry would stimulate Morocco’s economy through job creation and would help expedite the conflict in Western Sahara against the Polisario Front, so the United States’ support, even symbolically, will likely go a long way.

The United States also benefits from the timing of this partnership. Long-time allies, the United States has had access to Morocco’s military facilities by the Mediterranean Sea for years.

As tensions heat up between Turkey and Greece surrounding Cyprus and exclusive economic zones, having a presence in the region will be critical. Ongoing geopolitical tension in Africa related to violent non-state actors is also another driving factor in the United States’ reinvigorated relationship with Morocco.

The United States is also hoping that Morocco will be next in the line of countries that have recently normalized relations with Israel, including the UAE and Bahrain.

In the coming years there will be little to stop Morocco’s domestic military industry from flourishing. The coronavirus pandemic afforded the nation a window to increase the volume of its military purchases, and the United States is Morocco’s largest weapons exporter. With the formation of this industry all but certain, the questions will be twofold.

First, it is yet to be determined how the development of Morocco’s defense industry will affect the nation’s economy, especially as the country issued a new €1 billion bond on the London Stock Exchange in early October.

Issued in two tranches of 5 and 10 years with coupons of 1.375% and 2.00% respectively, the country is relying on long-term financial generation to back the confidence of this bond issuance, so the Moroccan government is likely optimistic.

Second, it will be fascinating to observe the effects of Morocco’s nascent military industry on the security landscape in the Maghreb and Sahel regions of Africa. With political and economic instability in Algeria, and rising terrorist threats coming from the South in Mali and beyond, Morocco presenting a strong military front could go a long way.

Fortunately, in conjunction with weapons imports from the United States, the recently-signed accord also ensures military cooperation and collaboration between Morocco and the US, suggesting forthcoming stability in the region.

Pay close attention to Morocco’s moves in the military space in the coming years, and each move will be intentional and calculated. There are long-term plans in place for socioeconomic growth and military growth in Morocco, and we are still in the early stages of their development. 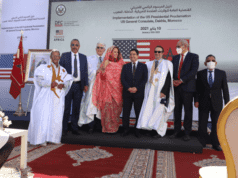