Moroccan officials assured that the project will not negatively affect the environment of the region, vowing to set up a station for the treatment of wastewater.

Rabat – Morocco’s Minister of Trade Moulay Hafid Elalamy launched on Wednesday the construction of the Ain Cheggag Industrial Park (PIAC), a zone dedicated to the production of leather goods.

The town of Ain Cheggag in the province of Sefrou near Fez will host the project, which will cover an area of 81 hectares, including 50 hectares for leather goods production.

Leather activities will include a tannery and sites for crafting shoes and other leather goods, while 31 hectares will be dedicated to general activities.

“The population of the region waited for the project for years, because it concerns a very important and job-creating sector,” Elalamy said.

Acknowledging that the activity is very polluting, the minister said the work has been done with a lot of technicalities to ensure that the surrounding environment is unharmed, the official added.

The minister said that it was important to put all the necessary infrastructure for the activity in favor of the region.

“A station specialized in wastewater treatment was set up,” the minister said.

Minister of Mines Aziz Rabbah also attended the launch, saying that the new project meets the needs of the national economy and the region of Fez-Meknes.

He believes the project would meet the expectations of citizens to create employment opportunities, especially after the impacts of the COVID-19 crisis.

Highlighting his department’s role in the project, Rabbah reiterated that the Ministry of Mines is contributing MAD 20 million ($2.17 million) to the realization of the PIAC.

To date, Morocco has invested MAD 1.2 billion ($130.05 million) into 120 projects that focus on the protection of the environment and the fight against industrial pollution.

Morocco sees PIAC as an opportunity to meet the expectations of investors and local economic operators, with the reception platforms for their project meeting international standards.

The project, according to the Moroccan government, would also integrate high value-added services, such as training, logistics, and wastewater treatment plants that should be dedicated to the treatment of effluents and combatting ecological pollution.

On the sidelines of the launch ceremony, the minister of trade along with several authorities from the Fez-Meknes region signed an agreement on the administration of the park.

The agreement sets the terms relating to the financing, governance, and management of the project. 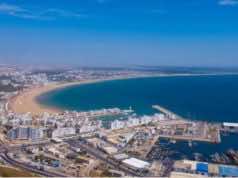