The inauguration comes a few days after both countries signed four agreements to boost cooperation.

The opening of the diplomatic representation in Dakhla is the sixth of its kind in the city and the second today. Earlier, Burkina Faso also opened its consulate general in Dakhla.

Bourita and Barbosa signed the agreements in Rabat on Wednesday.

“We have seen a total convergence of views,” Bourita said at a press conference after the inauguration ceremony.

He said that the meeting with his Guinean counterpart reinforced the “deep friendship” between the two countries.

Barbosa also said that her country is keen to strengthen ties with Morocco.

The signing also followed the opening of the Moroccan embassy in Bissau on Monday.

In addition to Burkina Faso and Guinea Bissau’s diplomatic representations, Dakhla also hosts the consulates of Gambia, Guinea, Djibouti, and Liberia. The three African countries opened their representations in the southern city earlier this year.

Several other countries also opened consulates in Laayoune. These include Djibouti, Cote d’Ivoire, Burundi, Sao Tome and Principe, and the Central African Republic.

Morocco’s government, which perceives the diplomatic openings as a validation of its Western Sahara position, has vowed that more countries will open consulates in the southern provinces in the coming months. 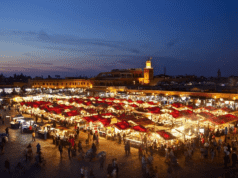