Rabat – Canadian aeronautics giant Bombardier announced on Monday that it has entered into an amended definitive deal to sell its aeronautics facilities in Belfast and Casablanca to Spirit AeroSystems Holdings.

Bombardier said the decision to sell the Ireland and Morocco sites to the US manufacturer is in line with the company’s plan to reposition itself as a “pure-play business aircraft company.”

The transaction of the agreement is expected to close on October 30.

The Canadian company announced that all closing conditions for the deal have been met.

The amended agreement concerns the sale of Bombardier’s aerostructures activities and aftermarket services operations in Belfast and Casablanca.

The deal also concerns Bombardier’s aerostructures maintenance, repair, and overhaul (MRO) facility in Dallas, Texas, for a budget of $275 million.

As well, the deal includes Spirit’s “assumption of liabilities, including government refundable advances and pension obligations, valued at $824 million.”

Bombardier CEO and President Eric Martel expressed satisfaction with the deal, saying it marks another milestone for the company.

“Today’s announcement marks another milestone towards achieving our strategic goal of repositioning Bombardier as a pure-play business jet company,” he stated.

He added that his company is “very excited” about its future as a “more focused company.”

The company also announced the decision to create a new division of the company, Bombardier Aviation.

“The proceeds from this transaction and from the pending sale of Bombardier Transportation strengthen our liquidity and position us to begin reshaping our capital structure and address our balance sheet challenges so that we can achieve the full potential of our incredibly talented employees and our industry leading business jet portfolio,” the CEO of the company said.

Spirit AeroSystems Holdings will take over the facility in Casablanca to join other aerospace giants in the field operating in Morocco.

International aeronautics companies operating in Morocco include Boeing and Safran. Spirit is one of the largest suppliers for Boeing aircraft.

Spirit has facilities in the US cities of Tulsa, McAlester, and Kinston,  as well as in Malaysia and France.

The US company also provides maintenance, repair, and overhaul services.

The aviation industry is one of Morocco’s key economic pillars.

Morocco’s aviation industry earned more than $1 billion in the first 11 months of 2017 compared to $870 billion in 2016, according to statistics from Morocco’s foreign exchange office in 2018. 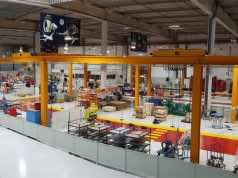 Le Piston Francais to Open a Second Factory in Morocco