Four countries opened diplomatic representations in Western Sahara over the past week. 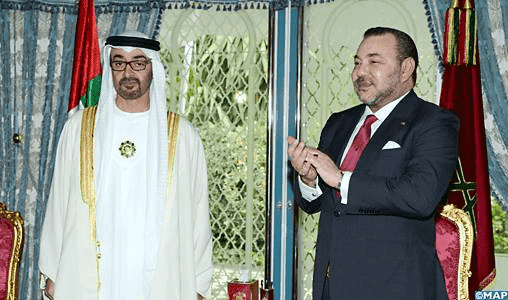 The UAE announced today its decision to open a consulate general in Laayoune, southern Morocco.

The Gulf country made the announcement during a phone call between King Mohammed VI and Crown Prince of Abu Dhabi Sheikh Mohammed Bin Zayed Al Nahyan.

A statement from the royal cabinet said the call was part of the permanent cooperation and regular consultations between the two countries.

During the call, King Mohammed VI expressed satisfaction with the decision.

The Moroccan monarch described the announcement as  historic, reflecting the UAE’s support for Morocco’s territorial integrity.

The announcement comes a few days after the UAE expressed support for Morocco’s sovereignty over Western Sahara during the fourth committee of the UN General Assembly.

Today, Eswatini and Zambia opened consulates in Laayoune. The opening of UAE’s diplomatic representation will be the ninth of its kind.

The UAE’s decision also comes at an important time. The UN Security Council will meet to vote on a new resolution to extend the mandate of the peacekeeping operation in Western Sahara, MINURSO.

“Moroccan diplomacy is reaping the fruits of its African policy,” Bourita said.

This decision signals a decisive thaw in relations between Morocco and the UAE.

Ties between the two countries were strained over the past three years because of their dissenting views over the Gulf crisis.

Relations between Rabat and Abu Dhabi started souring in the wake of the UAE and Saudi Arabia’s decision to cut their economic and diplomatic ties with Qatar. Bahrain and Egypt also joined the Saudi-Emirati alliance against Qatar.

Rabat, which has long enjoyed proverbial and solid ties with its Gulf allies, especially with Saudi Arabia and the UAE, decided to take a neutral stance and offered its good offices to end the rift between the Gulf Cooperation Council members.

Morocco’s decision did not sit well with Saudi Arabia and the UAE, who perhaps were expecting Morocco to join them in their boycott of Qatar.

Saudi Arabia and UAE’s displeasure with Morocco was on display when Saudi Arabia and the UAE voted in June 2018 for the US-Canada bid to host the 2026 World Cup, to Morocco’s detriment.

In addition, a number of Saudi and Emirati outlets started publishing reports and documentaries with rhetoric that deviated from the two countries’ principled position of support for Morocco’s territorial integrity and sovereignty over Western Sahara.

Rumors about a deterioration of Rabat-Abu Dhabi ties took on another dimension when the Emirati ambassador left Morocco in April 2019 pursuant to a “sovereign” Emirati request. The ambassador’s post in Rabat remained vacant until this summer when the UAE appointed Al Asri Saeed Ahmed Al Dhaheri as new ambassador to Morocco.

Observers regarded the appointment as a sign of Abu Dhabi’s will to mend ties with Morocco. Ambassador Ahmed Al Dhaheri had served as UAE’s ambassador to Morocco between 2011-2016, a period during which Rabat-Abu Dhabi ties reached new highs.

Throughout this period of uncertainty, Morocco kept its composure and abstained from taking any miscalculated step that could further deepen any misunderstanding between the two countries.

While ties between Rabat and Abu Dhabi suffered over the past three years, the UAE’s official position over Western Sahara remained unchanged.

The Emirates continued to express support for Morocco’s sovereignty over its southern provinces during each meeting of the different bodies of the United Nations, especially at the UN Special Political and Decolonization Committee, known as the Fourth Committee.