Moroccan and Chinese organizations signed on Tuesday a series of partnership agreements relating to the Mohammed VI Tangier Tech City.

The smart city is an ambitious project that King Mohammed VI launched in March 2017. The 200-hectare site is set to be completed by 2027.

China is contributing approximately $1 billion to finance the project and nearly 200 Chinese companies previously announced their intention to set up locations in the Tangier Tech City.

Under the agreements, CCCC and its subsidiary CRBC have formalized their participation in the capital of the Tangier Tech Management Company (SATT). Chinese corporations own 35% of the company’s capital.

SATT is the company responsible for building and managing the Mohammed VI Tangier Tech City. Its shareholders include the Regional Council of Tangier-Tetouan-Al Hoceima, BMCE Bank, and the Tanger Med Special Agency.

“A new step has been taken in Sino-Moroccan cooperation, marking the effective start of the project of the Mohammed VI Tangier Tech City: A modern, futuristic, ecological industrial city … and symbol of Africa’s openness to the entire world,” a statement from BMCE Bank said.

The signing ceremony took place virtually, with participants joining the meeting from Beijing, Tangier, and Casablanca.

During the ceremony, Chinese wind energy operator Aeolon announced its intention to open a plant in the Mohammed VI Tangier Tech City. The company expressed its readiness to invest $140 million in the smart city and create 2,000 jobs.

Other Chinese businesses that announced their intention to set up factories in the Tangier Tech City operate in the fields of automotive, aerospace, textile, electronics, and machinery. 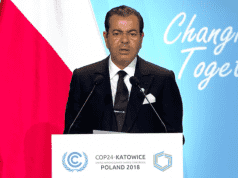