The two countries are linked by a Framework Agreement for Military and Technical Cooperation since 1993 and the Status of Forces Agreement they signed in 2013.

Rabat – Morocco and the UK are exploring means to forge strong military cooperation, one of the fields in which the two countries enjoy advanced cooperation.

The visit is the first of its kind for Heappey, who arrived in Morocco to discuss with Moroccan officials ways to strengthen military cooperation.

Lieutenant-General John Lorimer, the UK’s Defense Senior Advisor for the Middle East, and the British Ambassador to Morocco Simon Martin accompanied Heappey to the meeting with Bourita.

A statement from the Moroccan foreign ministry welcomed the military cooperation between Morocco and the UK, saying the two countries focus on “reciprocal support, training, organization of combined exercises, and exchange of visits and information.”

The ministry emphasized that Morocco-UK military cooperation is governed by a Framework Agreement for Military and Technical Cooperation that the two countries signed in 1993 and an agreement on Status of Forces signed in 2013.

Heappy’s visit comes a few weeks after the official trip of Lieutenant-General Lorimer who arrived in Morocco to discuss means to strengthen cooperation in the military field.

“Arrived in Morocco and have been warmly welcomed by the Ambassador Mr. Simon Martin. Looking forward to strengthening our relationships with the Moroccan Armed Forces over the coming days,” Lorimer tweeted on October 19.

During the visit, the senior advisor held talks with Bourita and Morocco’s minister delegate in charge of the National Defense Administration, Abdellatif Loudiyi.

The two visits are part of the regular exchange of visits between Moroccan and UK officials.

On a yearly basis, joint military commissions also take place in Rabat and London, alternately, where senior military officials from Morocco and the UK discuss cooperation in the field.

According to the UK government, bilateral trade between the UK and Morocco amounted to £2.2 billion in 2018. The Casablanca Stock Exchange also has a partnership with the London Stock Exchange and the British-Moroccan Chamber of Commerce can assist companies new to the market.

Morocco is also a popular destination for British tourists. 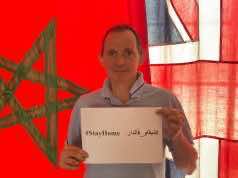 What a Weird World We Live In! British Ambassador: Morocco, UK Have A Lot to Offer to Africa