The British Armed Forces minister met with Moroccan defense officials during his first visit to Morocco, in addition to a meeting with Morocco’s FM, Nasser Bourita.

Rabat – Morocco’s military officials and their counterparts from the UK discussed on Thursday in Rabat the security situation in the Mediterranean region and the Sahelo-Saharan strip.

The Minister of the British Armed Forces, James Heappey, met on Thursday with Morocco’s Minister Delegate to the Head of Government in Charge of National Defense Administration, Abdellatif Loudiyi, and the Inspector of the General of the Royal Armed Forces (FAR), Abdelfettah Lourak.

He also met with Mohamed Haramou, Commander of the Royal Gendarmerie, on high Royal instructions.

A press release from FAR’s General Staff said the delegation accompanying Heappey included British High Defense Adviser in charge of the Middle East and North Africa Lieutenant General Sir John Lorimer, as well as Simon Martin, the Ambassador of the UK in Rabat.

During the meetings, Loudiyi and Heappey welcomed the “historic relations” of friendship and cooperation between the two countries in many fields.

The officials representing Morocco and the UK spoke about regional security, with a particular focus on the Sahelo-Saharan strip and the Mediterranean area.

Loudiyi renewed Morocco’s commitment against the scourge of terrorism and to the management of the migration crisis in the region.

Morocco has long expressed concerns regarding the situation in Sahel, deemed a breeding ground for terrorism.

A commentary from the Heritage Foundation in 2019 showed that the Sahel region hosts a “toxic stew of al Qaeda- and Islamic State-affiliated groups that are expanding their operations and becoming deadlier.”

The report also called on the US and other allies to coordinate closely to battle the upsurge in Sahel violence.

Earlier this month, the UN envoy for West Africa and the Sahel said the region experienced  “a devastating surge in terrorist attacks against civilian and military targets” in recent months.

The UN official said the violent attacks increased five-fold in Burkina Faso, Mali, and Niger since 2016, according to Al Jazeera.

To address the challenges, Morocco’s government called for shared responsibility between all partners to strengthen security to combat terrorism in the region.

The officials reiterated concerns regarding regional security during the visit of the UK delegation to Morocco, recalling their common desire to further deepen bilateral defense cooperation.

Loudiyi and Heappey also discussed their desire to advance cooperation in the defense industry. The two officials said that such cooperation could be integrated in a “mutually beneficial perspective through sustainable investment partnerships and industrial development.”

Loudiyi and the British minister also expressed their willingness to initiate dynamic cooperation in the fields of cybersecurity and cyber defense. 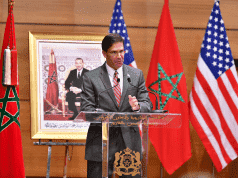