The meeting was scheduled to take place in October 2021 in Marrakech, a popular destination for international and local tourists.

Rabat – The World Bank, International Monetary Fund (IMF), and Moroccan government have postponed holding the annual meetings of the two international financial bodies in Marrakech, which was set to host the event in October 2021, until 2022.

The International Monetary Fund, World Bank, and Morocco took the decision due to the continued spread of COVID-19.

Lacking approved vaccines, countries and global institutions have had to cancel or postpone several major international events due to COVID-19.

So far, the world has confirmed 48.3 million cases, including 32 million recoveries and 1.23 million deaths.

Morocco continues to confirm thousands of cases daily and dozens of fatalities.

The economic institutions’ meetings typically take place two years in a row at the World Bank Group and IMF headquarters in Washington.

The meetings take place in another member country every third year.

A vote by the boards of governors of the IMF and the World Bank decided to hold the annual meetings in Marrakech in October 2021.

The last time the meetings took place in Africa was in 1973 in Nairobi, Kenya. 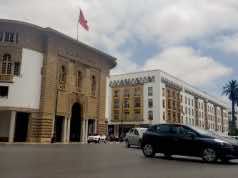