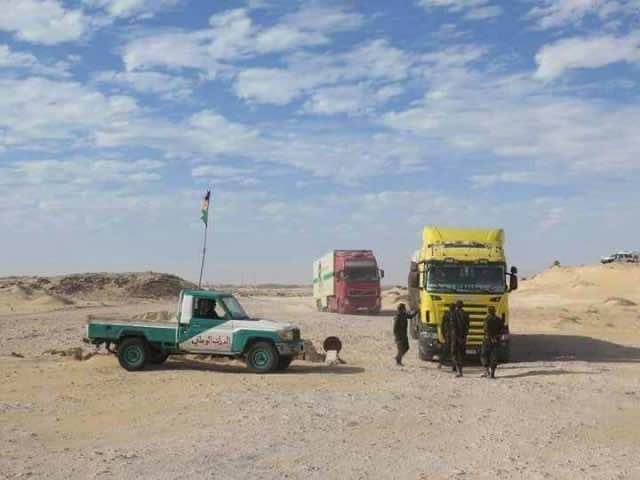 Meknes – In continued defiance of the UN’s warnings, Polisario elements are still obstructing traffic in Guerguerat, blocking the way back for 200 Moroccan truck drivers.

On Thursday, the 200 victims of Polisario’s blockade, who have been stranded for over three weeks in a desert between Morocco and Mauritania, issued an impassioned statement urging both Moroccan and Mauritanian authorities to come to their rescue.

Stuck in “very bad conditions under a blazing sun,” the Moroccan drivers decry “arid desert without markets, without shops, or even drinking water.” The drivers ask for an “urgent intervention” to provide them with “water, food, and medicine,” especially that some of them “suffer from chronic diseases.”

They also call for a quick solution to end the Guerguerat crisis so they can make their way back home and reunite with their families. The Moroccan drivers also call on “the international community, all political actors and civil society in the region, to pressure for the complete reopening of the passage and allow travelers to cross safely.”

The statement, which has made the rounds in the Mauritanian media, also pleads with the UN to intervene to solve the crisis. The UN Security Council is moderating the Western Sahara peace process and has repeatedly warned Polisario against obstructing traffic in the buffer zone.

Echoing the ongoing political process in their cri de coeur, the drivers pointed out that MINURSO, the UN peacekeeping mission in Western Sahara, should “assume their role in protecting the buffer zone.” They stressed that “the border crossing provides work for thousands of workers, including drivers, farmers, and traders”.

However, Polisario’s blockade does not only affect the livelihood of truck drivers. According to the statement, the flow of merchandise and goods at the Morocco-Mauritania border considerably impacts “consumers in several countries such as Mauritania, Mali, Niger, Burkina Faso, and Côte d’Ivoire”.

After urging Morocco’s embassy in Mauritania to “urgently work to improve” their conditions, the Moroccan truck drivers in Guerguerat concluded their statement by calling on the media and civil society organizations to “voice our humanitarian case.”

While expressing their satisfaction with both Mauritania’s assistance and the Moroccan embassy’s response, they asked for bolder measures to end Polisario’s blockade in the buffer zone in Western Sahara.

In late September this year, the UN warned Polisario against its escalating tensions by violating the status quo in Guerguerat. The warnings came after the separatist group obstructed traffic in the buffer zone, at the Morocco-Mauritania borders.

“Regular civil and commercial traffic shall not be obstructed and no action shall be taken that might constitute an alteration of the status quo in the buffer zone,” said Haq, the UN’s chief Antonio Guerret’s deputy spokesperson.

Despite the slew of warnings from the UN, Polisario has patently refused to comply, brandishing its disappointment with the UN-led process in Western Sahara.

There are suggestions that the group’s increasingly defiant attitude is an act of calculated brazenness designed to panic the UN into changing its current, largely pro-Morocco position on the Sahara conflict.

Meanwhile, as Polisario elements continue to violate the ceasefire and interrupt traffic in the buffer area, it remains to be seen whether Morocco will respond to some citizens’ calls to respond in kind to Polisario’s provocations.