For more than four decades, Morocco has steadily built on the momentum of the Green March to restore its territorial integrity. 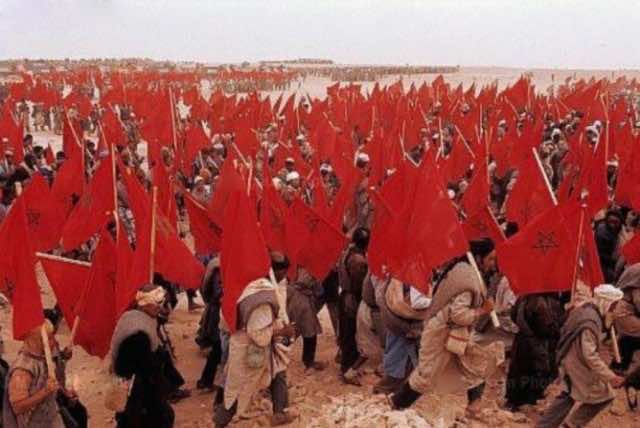 Every year, Morocco proudly commemorates November 6, 1975, when 350,000 unarmed Moroccans marched into the Sahara desert to protest Spain’s occupation of the Western Sahara region.

The late King Hassan II launched the movement on October 16, 1975. He galvanized the Moroccan public with a distinctly patriotic speech on national TV and radio stations. “We have to do one thing dear people and that is to undertake a peaceful march from the north, the east, the west to the south. It behooves us to act as one man in order to join the Sahara,” said the King.

Shortly after the speech, Spain entered into negotiations with Morocco and Mauritania about the status of Western Sahara. But seeing little progress in negotiations, King Hassan II decided to move forward with the peaceful popular uprising that became known as the Green March.

The Green March derives its name from the color of Islam. Armed with Qurans, Moroccan flags, and banners of the King in hand, the Moroccan demonstrators remembered King Hassan II’s role as Commander of the Faithful. United under his call to complete Morocco’s territorial integrity, the demonstrators personified Morocco’s unrelenting commitment to liberating Western Sahara.

Just one week after the Green March, Spain committed to leaving the region by May 23 with the signing of the Madrid Pact on November 14.

Yet 45 years later, Morocco’s legitimacy claims over the region still face contention in the international community.

The creation of Polisario

Years before the Green March and the signing of the Madrid Pact in 1975, Spain sent delegations from Western Sahara to attend the deliberations of the United Nations Special Political and Decolonization Committee (Fourth Committee) in New York.

The delegations voiced their attachment to Spain’s presence in the region, fueling an artificial movement seeking to preserve Madrid’s interests in the territory.

Read also: Facts about Western Sahara Conflict that You Should Know

Meanwhile, the Polisario Front was created in May 1973, initially setting out to fight Spanish colonialism. It then began claiming to be the representative of the Sahrawi people and demanding an independent state in Western Sahara.

With the financial support of Algeria and Libya and the sympathy of the Spanish public, the Polisario Front was empowered to wage war against Morocco just after the signing of the Madrid Pact in 1975.

The Algeria-backed Polisario Front has plagued Morocco’s efforts to complete its territorial integrity for decades since the Green March. While there have been no shots fired in the region since 1991, Polisario and Algeria continue their international political campaign against Morocco.

Over the years, however, Polisario’s facade as a revolutionary group with the interests of Sahrawis at heart has started to crack.

With its known embezzlement of humanitarian aid and diversion of foreign funds to buy arms, dozens of blatant violations of Military Agreement No. 1, and repeated provocations in the buffer zone, Polisario’s legitimacy on the international stage is slipping.

Officials and politicians, particularly in Europe, have increasingly condemned Polisario’s aid embezzlement and human rights violations in the Tindouf camps. In October, the UN secretary-general’s annual report on the situation in Western Sahara underscored dismal living conditions in the Polisario-run refugee camps, where malnutrition, anemia, and poverty are rife.

The UN report also listed 53 new Polisario violations of the MINURSO peacekeeping mandate, including several military violations. Documenting Polisario’s contempt towards the UN peace process,, the report also denounced the militant group’s provocations in Guerguerat, a town in the buffer zone between Morocco and Mauritania, where it has disrupted cross-border commercial and civilian traffic in recent weeks.

As Polisario loses favor with previous allies in Latin America and Africa, Morocco is enjoying unprecedented diplomatic momentum in Western Sahara and its Autonomy Plan is earning increasing recognition as a viable solution to the conflict.

Read also: Western Sahara: Everything You Should Know About Morocco’s Autonomy Plan

Morocco submitted its autonomy initiative to the UN in 2007. The plan recommends making Western Sahara a semi-autonomous region that remains under Morocco’s sovereignty.

The plan would allow the region’s inhabitants to manage their social, economic, and political development while Morocco handles defense and diplomacy.

The UN Security Council has acknowledged Morocco’s Autonomy Plan as a realistic, pragmatic approach to solving the territorial dispute. Meanwhile, Polisario and Algeria’s dreams of a referendum steadily fade from view.

On the 45th anniversary of the Green March, more countries than ever before are standing beside Morocco in its fight for sovereignty.

Not only have scores of countries from every continent expressed support for Morocco’s Autonomy Plan, many have also overtly expressed their “uncompromising” and “undying” support for the country’s sovereignty over its southern provinces.

This growing support is most tangible with the presence of diplomatic representations in the cities of Dakhla and Laayoune. While Polisario and its allies call the land “occupied” and Morocco a “colonizer,” 16 countries have cemented their acknowledgment of the Moroccan character of the Sahara by opening general consulates.

Fifteen countries from West, East, Central, and Southern Africa have opened general consulates in Laayoune and Dakhla since December 2019.

Additionally, the UAE became the first non-African Arab country to inaugurate a consulate general in the region on Wednesday, ahead of the 45th anniversary of the Green March. Morocco is hopeful the historic move may inspire other Arab states to follow suit and broaden concrete support for the cause beyond the continent of Africa.

Morocco’s development projects in the southern provinces have also earned the country and King Mohammed VI greater respect in the international arena.

Harnessing the spirit of the Green March and the quest to unite north and south, King Mohammed VI launched the New Development Model of the Southern Provinces in November 2015. The plan is based on the principle of local participation in development policies and projects.

The development model also entails strengthening the economic and social rights of the region’s population. It has ushered in major financing projects in the fields of health, infrastructure, training, industry, agriculture, renewable energy, and sea fishing.

While the distressed Sahrawis in the Polisario-run camps in southern Algeria face constant restrictions on their freedoms, locals in the Morocco-administered regions and Algeria enjoy full political, economic, and social rights.

For more than four decades, Morocco has built on the momentum of the Green March despite maneuvers and lobbying by Algeria, South Africa, and the Polisario Front.

While the political process to resolve the dispute remains deadlocked in the absence of a UN Special Envoy in Western Sahara, Morocco is standing taller than ever before after great diplomatic strides and relentless political, social, and economic development efforts in the south.

Every year on November 6, Moroccans remember the Green March as a watershed event in the country’s recent history, taking pride in new achievements and celebrating their continued unity, against all odds, to reclaim their ancestral homeland.

The legacy of the Green March reflects a patriotic and peaceful Moroccan people who remain committed to the independence, strength, and sovereignty of their country.