Eric Zemmour is known for his controversial remarks about many topics, but his comments on the US election drew mockery from French citizens.

Rabat – Polarizing French “philosopher” and essayist Eric Zemmour has shared yet another controversial comment but this time, his remarks were on the US presidential election.

On Monday, Eric Zemmour shared his conspiracy theories on Joe Biden winning the US election over incumbent President Donald Trump.

During a debate titled “US election: a media coup?” with Christine Kelly, Zemmour accused US media of “betting” on Biden’s victory.

He said American media did “everything to make Biden win” and denounced the “phenomenal media campaign” against Trump.

Eric Zemmour gave examples from the states of Wisconsin and Michigan, claiming that election officials abstained from counting “for several hours” until the tally favored Joe Biden.

Christine Kelly asked Zemmour about where he got the information, but Zemmour refused to give his sources and cited his inability to remember them on air.

When Kelly asked Eric Zemmour if he thinks his remarks are conspiratorial, the polemicist argued that he has no proof and he was not in the US during the election.

“But I’m saying just one thing, I’m saying if it had been the other way around, the American media would have done some monstrous investigations,” he insisted.

Zemmour’s remarks drew mockery and sarcasm from internet users, who were surprised that the subtitle that appeared on screen during the debate read “Joe Biden: President of the media.”

One Twitter user said that seeing such a title without a question mark, as if it were a fact, “was unbelievable.”

“Magnificent exercise of bad faith and high-level conspiracy by maestro Zemmour!” one user wrote. “In ‘Face a l’info,’ Eric Zemmour wonders about Joe Biden’s victory. Indeed a zero point on his arguments, his vague explanations only demonstrated its slippages.”

However, others supported Eric Zemmour’s conspiracy.

One said that at least “CNEWS dares not be in [a] single thought, like BFMTV and the others. [CNEWS is] the only TV outlet that talks about Trump’s good economic record and possible electoral fraud. The other media [are] pro-Biden propagators.”

The US election marked unprecedented events, with Donald Trump accusing Biden of stealing the win.

Throughout the election, Trump claimed voter fraud was rampant and called on state election officials to stop counting mail-in ballots.

It was not until November 8 — five days after the election — that US media projected Biden’s win when he acquired the 270 electoral votes needed to win the presidency.

While Trump is contesting the results of the election, several world leaders have congratulated Biden on his win, including French President Emmanuel Macron. 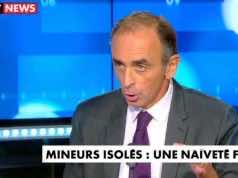