FAR’s direct announcement of its security operation in Guerguerat may have been an implicit warning to Polisario to stand down. 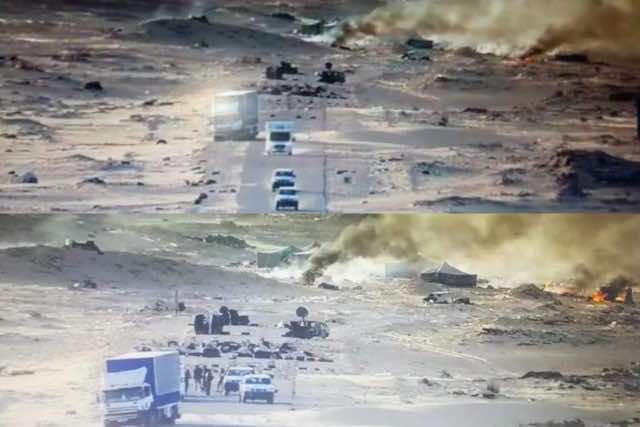 Rabat – On the morning of November 13, Morocco’s Royal Armed Forces (FAR) excitedly prepared for the launch of an exhibition in Rabat that reflects on its role in 60 years of global peacekeeping efforts. Deep in the Sahara desert, however, Moroccan forces carefully moved towards Guerguerat.

The Polisario Front, the Algeria-backed separatist group demanding an “independent state” in Western Sahara, has had the border town of Guerguerat in a chokehold for weeks.

A blockade of the crossing between Morocco and Mauritania left Moroccan truckers stranded south of the border, disrupted supply chains to Mauritanian markets, and prompted repeated warnings to leave the UN-monitored buffer zone and cease provocative maneuvers.

King Mohammed VI said in his November 7 Green March anniversary speech that Morocco will firmly respond to any “attempts designed to undermine the security and stability of its southern provinces.” Yet up until Friday morning, there was no expectation that Morocco would need to take action in Guerguerat.

The Royal Armed Forces managed to secure the border crossing Friday night, after sending a strong and rare message to Polisario.

Hours before Western Sahara saw its first act of open hostility in nearly three decades, the General Staff of the Royal Armed Forces issued a press release to announce it established a security cordon at the border post in Guerguerat late on Thursday night and into early Friday morning.

The “non-offensive operation” was void of “bellicose intent” and sought to secure the flow of goods and people between Morocco and Mauritania, FAR stated.

Morocco’s Royal Armed Forces assured it was acting “according to clear rules of engagement, requiring [FAR] to avoid any contact with civilians and to resort to the use of arms only in self-defense.”

The FAR statement itself did not contain any indication that tensions between Morocco and Polisario were bound to escalate later on Friday morning. Yet the fact that FAR issued the announcement suggested that the situation in Guerguerat was indeed grave.

It is not common for Morocco’s Royal Armed Forces to release direct statements to the public. The National Defense Administration usually relays information to the media and Moroccans on the armed forces’ behalf.

In fact, Moroccan outlet Le360 said the most recent press release from FAR accessible online is a statement announcing the death of Lieutenant General Abdelhak El Kadiri that dates back to November 2017.

Given the rarity of direct press releases, some observers may interpret FAR’s announcement as a warning that it would no longer idly watch the militant group violate international agreements to deflect from its diplomatic failures.

In short, FAR may have intended the press release to be a message to Polisario to stand down.

Last-ditch efforts in a losing cause

Polisario, however, seems to have abandoned an increasingly pro-Morocco political process to settle the dispute, no longer interested in diplomacy.

At 8:55 a.m. on Friday morning, Polisario elements, startled by the mobilization of Moroccan troops, set fire to their encampment 2.5 kilometers south of the border and fled east.

The spokesperson for the self-styled “Sahrawi Arab Democratic Republic” issued a statement announcing that “the fighting has started and war is declared.”

A desperate, disgruntled Polisario already losing favor in the political process did not hesitate to break the 1991 ceasefire, launching an attack north of the Moroccan defense wall in Mahbes, a settlement in the UN buffer zone.

With dreams of a referendum essentially dashed given the most recent UNSC resolutions on Western Sahara, Polisario appears to have nothing left to lose.

Despite having Algerian funds and arms, a handful of international mouthpieces, and plenty of embezzled humanitarian aid, Polisario is poised for failure.