The Moroccan skydiver completed the jump to commemorate the Green March and Independence Day. 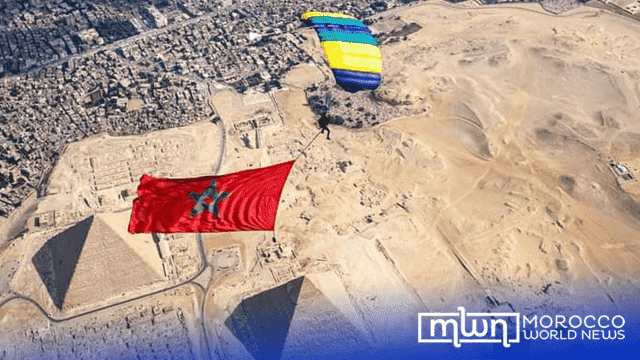 Rabat – Moroccan skydiver Anas Bekkali has once again flown the flag of Morocco in the sky, this time above the Pyramids of Giza in Egypt at a height of 4.5 kilometers.

The Moroccan record-breaker gained global recognition for completing the highest jump with a flag in the world above the peak of Mount Everest in the Himalayas, at 9.1 kilometers. The Everest jump was in honor of the 42th anniversary of the Green March in 2017.

In his most recent display of patriotism, the skydiver completed four jumps over the Pyramids of Giza with the Moroccan flag on November 9 and 10.

Anas Bekkali told Morocco World News that his jumps served to commemorate a number of events taking place during an “interesting time” for Morocco.

Bekkali added that in hindsight, he wants the jump “to support our troops and show them respect” in light of Morocco’s successful military action to secure the Guerguerat border crossing on November 13.

Describing his affinity for skydiving, Bekkali said it changed his life in a way that he never imagined.

“It allowed me to travel the world and see it from the sky, which you don’t get as a normal traveler,” he beamed.

Throughout his career, the world-renowned skydiving instructor has accompanied a number of celebrities in their jumps, namely Cristiano Ronaldo, Zineddine Zidane, and Will Smith.

The 32-year-old Moroccan skydiver performed notable jumps over the island of Palm Jumeirah in Dubai and over the city of Chicago in the US.

He broke world records for jumping with the largest group of parachutists in Chicago, with participants numbering 164 and 184 in 2015 and 2018, respectively.

During the Palm Jumeirah jump, Bekkali wore the jersey of the Moroccan national football team to show support for the Atlas Lions during their participation in the 2018 World Cup in Russia.

Anas Bekkali told Morocco World News that having a career that allows him to combine his love for his country and his passion for skydiving is a blessing he is eternally grateful for and humbled by.