Morocco’s General Delegation for Prison Administration and Reintegration (DGAPR) has announced the establishment of a studio to record lessons for inmates at the Sale Local Prison 2, near Rabat.

The German Adult Education Association, known as DVV, and the Mohammed VI Foundation for the Reintegration of Detainees jointly launched the initiative.

The DGAPR recently announced the project in a press release. According to the document, the studio started operations Friday, November 20.

The establishment of the new facility is part of a broader project that aims to provide educational and vocational training programs to Moroccan prisoners, the DGAPR said.

The recording studio seeks to improve the quality of lessons provided to inmates. University professors will visit the facility to record lessons in various fields. The lessons will then be broadcast to prisoners.

The DGAPR began last week broadcasting the recorded courses to inmates at the central prison of Kenitra, as part of a trial period. In the future, the organizers will generalize the initiative to all penitentiary establishments across Morocco to serve as many prisoners as possible.

Besides the recording of lessons, the studio will also serve as an expression tool for inmates at the Sale Local Prison 2. The prison’s administration will allow prisoners to record their artistic, cultural, and intellectual creations, such as poems, stories, and songs, under the supervision of correctional officers.

The DGAPR intends to develop partnerships with various actors in the future in order to diversify the training and education programs available for inmates.

The studio’s inauguration ceremony took place at the Sale prison on Friday in the presence of several officials, including the secretary-general of the DGAPR, the general coordinator of the Mohammed VI Foundation for the Reintegration of Detainees, the North Africa general director of the German Adult Education Association, and the vice-president of the Mohammed V University of Rabat. 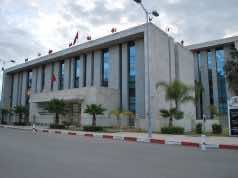