Meanwhile, the value of the Moroccan dirham depreciated against the Euro by 0.15%.

Rabat – Morocco’s central bank, Bank Al-Maghrib, announced that the Moroccan dirham appreciated against the US dollar by 0.36% from November 20-25.

The Moroccan dirham, however, depreciated against the Euro by 0.15% during the same period.

The figures are a significant change from last month. Between October 8-14, the bank reported that the Moroccan dirham appreciated by 0.62% against the Euro and by 0.45% against the US dollar.

Meanwhile, the stock of Morocco’s official reserve assets stood at MAD 292.8 billion ($32.25 billion) as of November 20, representing an increase of 0.5% over a seven-day period.

The number also represents an increase of 24.2% on a yearly basis.

The sum is divided between seven-day advances on call for tenders (MAD 40.5 billion or $4.46 billion), deliveries on repurchase agreements (MAD 23.9 billion or $2.63 billion), and financing support programs for small and medium enterprises (MAD 31.6 billion or $3.48 billion).

As well, MAD 7.4 billion ($815 million) of the total amount was in the form of foreign exchange swap operations.

The average daily volume of trade stood at MAD 5.2 billion ($572.47 million) and the interbank rate stood at 1.5% on average from November 19-25 at the level of the interbank market.

Regarding the stock market, the bank announced that the Moroccan All Shares Index (MASI) appreciated by 3.6%, reducing its underperformance since the start of the year to 8.8%.

COVID-19 significantly impacted Morocco’s economy, and Bank Al-Maghrib vowed a series of reforms to mitigate repercussions caused by the pandemic.

On Tuesday, the head of the central bank said Morocco recorded an increase in the unemployment rate, amounting to 12.7% in the third quarter of 2020.

He does not expect Morocco’s economy to fully recover until 2023 due to uncertainty in the global economy. 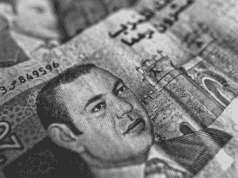