Morocco’s Olympic Taekwondo team has begun a training camp in France to prepare for the 2021 Tokyo Olympics, set to begin next July. The training camp will run for several weeks, until January 23.

Morocco’s Royal Taekwondo Federation (FRMTKD) organized the training camp in partnership with the Ministry of Culture and the Moroccan National Olympic Committee (CNOM).

The institutions are providing the Moroccan athletes with financial support to help them prepare well for the Olympics, a statement from the FRMTKD said.

The training camp in France is their first session that will take place outside of Morocco in preparation for the Tokyo Olympics.

Due to the COVID-19 pandemic, the Moroccan Taekwondo fighters spent several months working out at home.

After the Moroccan government eased lockdown measures, the athletes took part in several training camps at Al Akhawayn University in Ifrane. The latest training camp at the Moroccan university took place from November 11 to December 9.

Due to the tight schedule ahead of the Olympics, the Moroccan fighters only had one week of rest before flying to France.

The athletes secured their spots at the international sporting events in late February during the African Taekwondo Olympics Qualifiers, held in Morocco.

The three fighters expressed their eagerness to lift the Moroccan flag at the Olympics after their qualification.

“Four years ago, I remember watching the Olympics on television as a kid. Today, I achieved the dream of athletes from all over the world,” 20-year-old Mahboubi said after qualifying.

In Tokyo, the young fighters will try to earn Olympic medals and achieve what national Taekwondo teams failed to do in five previous participations. 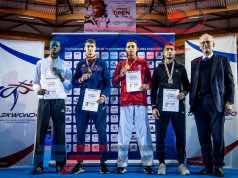