Morocco’s Minister Delegate to the Head of Government in Charge of National Defense Administration, Abdellatif Loudyi, participated on Wednesday in the 16th ministerial meeting of the 5+5 Defense initiative.

The initiative brings together defense ministers from five countries on the northern shore of the Mediterranean: France, Italy, Malta, Portugal, and Spain; and five states south of the sea: Morocco, Algeria, Tunisia, Libya, and Mauritania.

During the meeting, the Moroccan minister thanked the participating officials for taking part in the initiative, saying the regular sessions have significantly contributed to promoting pragmatic cooperation between Mediterranean countries.

Loudyi invited the 5+5 Defense group to tackle urgent issues, such as irregular migration and terrorism, according to a collaborative approach where all countries share responsibility.

“The Kingdom of Morocco, under the leadership of His Majesty King Mohammed VI, is fully adherent to this approach,” Loudyi said.

The Moroccan official touched on several topics, including the ongoing negotiations to solve the Libyan political crisis.

He congratulated Libyans for the progress they have made towards reaching a solution to their domestic dispute and reiterated Morocco’s support for peace and stability in Libya.

Wednesday’s meeting, chaired by Malta, concluded with the signing of a joint declaration in recognition of the participating countries’ contribution to the global fight against COVID-19, terrorism, and organized crime.

The ministers also reviewed the activities of 5+5 Defense in 2020 and discussed the 2021 action plan.

Next year, the chairmanship of the group will transfer from Malta to Mauritania. 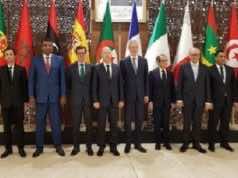