“When happening deeply saddens me, frustrates me, or inspires me. Writing becomes a sort of liberatory and redemptive force and hopefully an inspiring one for others too. The daily life is saturated with inspiration, we just need to open our eyes and see it, feel it.” 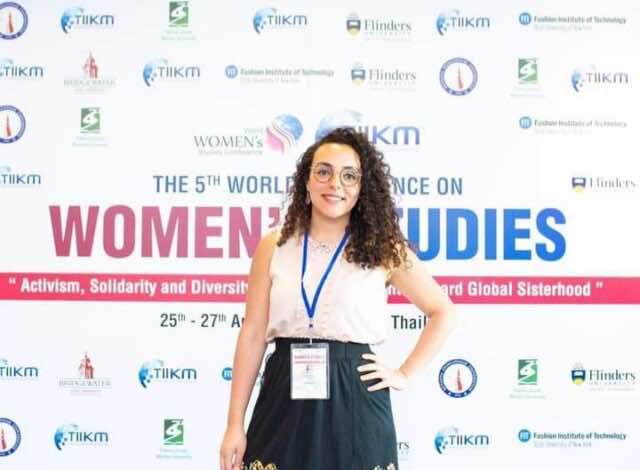 “I am surprised at my own capabilities and at the same time pleased and excited to represent Morocco the best way possible at the African and World Cups,” Maha said in an interview with Morocco World News.

The Africa Slam Poetry Cup is an opportunity that, together with many artistic talents around this art, promotes, lyrically and subtly, intellectual and cultural development on the continent. It aims to promote slam and public speaking across Africa.

Part of the Africa Slam Poetry Cup, and with the support of the Moroccan Reading Network, NGO Let’s Get Psyched Up, and the Casablanca School of Psychology, the Morocco Cup of Slam Poetry aims to promote slam culture in Morocco and introduce artists to other cultures.

It also strengthens Moroccan slam artists’ creative potential. The Cup’s virtual stages helped promote their visibility and the planning of many projects with Tunisian and Algerian artists, highlighting the linguistic-cultural richness of each country.

In its second year, CMSP hosted workshops and performance events that gathered 40 young Moroccan urban artists, poets, writers, and slammers to participate and work collectively. Their collaboration continued until the final meeting, which took place on Zoom due to the COVID-19 crisis.

CMSP announced Maha Tazi as its winner on December 26. This earned her a spot in the Africa Cup of Slam Poetry, scheduled for November 2021 in Ethiopia, and the World Slam Poetry Cup, which will take place in Paris in May 2021.

Moroccan Ambassador to the CASP Fatine Moubsit will accompany Tazi, who spoke to Morocco World News about her personal engagement with the art.

Born and raised in Casablanca, the 29-year-old poet is a Ph.D. student in Cultural Studies and has proven a resilient activist for women’s art in contemporary Morocco since 2011. With an interest in various forms of ARTivism, the young poet actively engages in research through photography, audiovisual work, and slam poetry projects that combine academia and creativity.

“One peculiar aspect with my slams I would say is that I use a lot of academic references in them,” Maha told Morocco World News.

The doctorate student has also taught at the university level, lecturing on various topics such as philosophy, media criticism, and intersectional feminism, since 2014.

Maha started writing poetry when she was only seven, addressing topics such as life, death, melancholia, friendship, love, and hope. The young artist’s mother still keeps her first collection of poems. When Maha reads them, they take her back to when she was seven with a writing style that was innocent and a little elaborate yet genuine, authentic, and free.

“I like the symbolic [meaning] of that first collection remaining there (at her parents’ home), where it belongs. Sometimes, when I’m back home, I read those poems and I find myself smiling and feeling nostalgic.”

Maha shared with Morocco World News that she has always put art and creativity second after her studies and other academic commitments, something that the artist admits is a big mistake.

Last May, Maha had the opportunity to perform for the first time one of her poems for the Moroccan Cup of Slam Poetry. She also took it as a chance to break from the isolation of the lockdown and confinement and engage with people, even if it was virtually.

“I had no idea whatsoever how the audience reception would be, how far I could make it in the Cup, or if my slams were ‘good’ or not.”

Maha was happy as well as surprised about the CMSP results. She wished everyone would start believing in their creative side more, because she initially did not when it came to slam poetry.

Not only was the artist happy about the result of the first video performance, but she was also pleased with the audience’s reception. Viewers shared it widely on social media and it received highly positive comments.

Through her first performance, Maha noticed some aspects for improvement that she decided to work on, especially on the performance level.

Maha’s poetry addresses several topics and social issues including the meaning of life and existential questioning. In this, she draws her inspiration from famous philosophers such as Aristotle, Socrates, Sartre, and Camus, and the spleen as defined by the French poet Charles Baudelaire.

Being a woman, Maha is also drawn to writing poems about women’s rights and gender equality. Her experience of living in the West for half of her life has also encouraged her to write about Orientalism.

“On these last two points, I feel two people I want to pay a special tribute to for inspiring me are Edward Said and Fatima El Mernissi.”

When it comes to the perfect writing time, Maha works whenever she feels the urgency and the need to do so.

“When a happening deeply saddens me, frustrates me, or inspires me. Writing becomes a sort of liberatory and redemptive force and hopefully an inspiring one for others too. The daily life is saturated with inspiration, we just need to open our eyes and see it, feel it,” the poet said.

The lively creator also feels a sense of community when she is with artist or creator friends, as they gather regularly to discuss ideas, existential questions, projects, and share experiences. Maha has not done any group work yet but she enthusiastically invites everyone to stay tuned for an upcoming project she is founding called M’Artsy, which will launch in 2021.

Maha believes that the CMSP experience allowed her and other artists to break free from their isolation and social disconnection during confinement as well as build a community around an interest and a passion they all share—slam poetry.

Upon her CMSP win, Maha found herself surprised by her own capabilities and at the same time pleased and excited to represent Morocco at the international competitions. She is also taking more tutorials and training in performance, which she considers not her strongest suit, so that she can represent Morocco the best way possible.

“Morocco is my home, my childhood, my first dreams, my vulnerability but also my strength. From these roots, I draw most of my inspiration. The least I can do is pay tribute to Morocco [which] I always carry with me everywhere by representing it the best I can at the two upcoming Cups.”