The promotion seeks to reward police officers and security services who have been in the frontline to ensure security and order during the COVID-19 crisis. 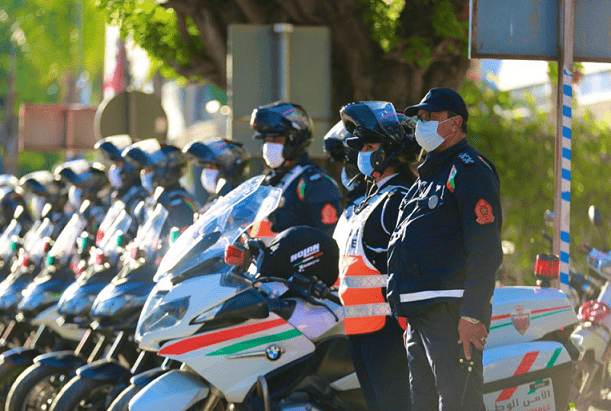 DGSN said that a total of 9,499 police officers from all ranks benefited from a promotion.

The security body said that the 2020 budget year allowed for the expansion of the amount of officers receiving a promotion compared to a year earlier. This year’s round of promotions benefited 2,093 more staff members, up 28.26% from 2019.

The promotion concerns 7,204 police officers and 2,295 members of the civilian services.

The promotion seeks to reward the efforts of the DGSN security services, who have been on the frontlines to help ensure order and security amid the COVID-19 crisis.

The DGSN mobilized the entirety of  its personnel in all regions across Morocco to ensure lockdown measures, when Morocco announced a state of emergency back in March.

2020 was a special year for DGSN, as the security service  commemorated its 64th anniversary in May.

During the anniversary, Director General of DGSN and the General Directorate for Territorial Surveillance (DGST) Abdellatif Hammouchi addressed all police officers, calling them family.

Hammouchi said the commemoration  of DGSN’s anniversary comes at a special time due to the pandemic.

Hammouchi Commended DGSN members, stating he appreciated the great sacrifices and commendable endeavors of the police in the face of COVID-19. The DGSN’s director-general stressed that “the security institution’s raison d’etre is mainly for the service of homeland and citizen security issues alike.”

The DGSN’s director-general stressed that “the security institution’s raison d’etre is mainly for the service of homeland and citizen security issues alike,” as he commended police efforts in the face of COVID-19,

Hammouuchi is among the most respected security leaders in Morocco.The security official earned several platitudes from international media for his efforts.

In 2019, Jeune Afrique devoted one of its covers to  Hammouchi in a  feature story that described Hammouchi as a”supercop.”

In July 2018, the Italian daily newspaper II Post similarly dubbed Hammouchi a “the superagent who never sleeps,” describing him as a “powerful and respected” policeman.

That same month, Spanish outlet El Pais also paid tribute to the “superagent,” saying that the “security of Europe is linked to cooperation with [him].”