Morocco has acquired 65 million doses of vaccines, including Sinopharm and AstraZeneca for a target population of 25 million. 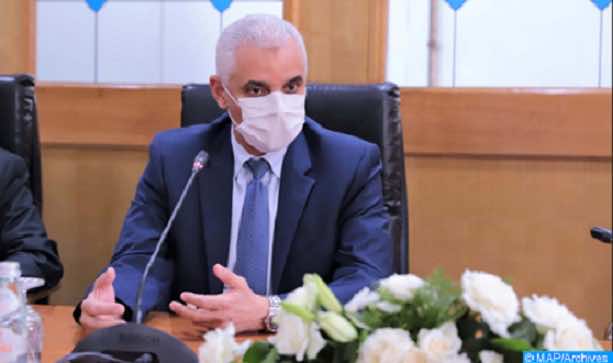 Rabat – The Minister of Health, Khalid Ait Taleb, on Thursday called on Moroccans to fully respect all planned measures in order to enable a successful vaccination campaign against COVID-19.

However, Khalid Ait Taleb did not yet unveil when Morocco will launch the campaign.

“We call on Moroccans to rigorously respect measures during the vaccination period which will be launched in the coming days,” Ait Taleb said during a press briefing.

The minister reiterated that the intended group immunity could only be achieved if more than 60% of the population is vaccinated.

The minister said that there is a gap period between the two injections of the vaccine against COVID-19, for which Morocco has selected. This means citizens will have to have two vaccinations, separated by several weeks. During the gap between vaccinations citizens will continue to have to follow regulations as they can still contract COVID-19.

“The vaccination campaign could be impacted, if positive cases of COVID-19 are recorded during this gap period,” the minister argued.

The official said that Morocco’s health officials are mobilizing to ensure the success of the campaign.

Ait Taleb said that Morocco met its committee of exports to look at the clinical and scientific data to validate and authorize the vaccines, including those produced by Sinopharm and AstraZeneca.

He said the authorization of the vaccines will meet the recommendations of the World Health Organization.

Morocco has already acquired 65 million doses of Sinopharm and AstraZeneca yet the doses have not yet arrived in Morocco.

Through the campaign, Morocco will target a population of 25 million people.

Preparations for the launch of the national vaccination campaign have reached a “very advanced” stage, the minister said.

Morocco started setting up  medical staff responsible for the vaccination department across the country.

Morocco intends to mobilize more than 25,000 medical personnel, including 11,000 in urban areas.

The campaign will first prioritize frontline workers, such as medical staff, local authorities, teachers, and people with chronic conditions.