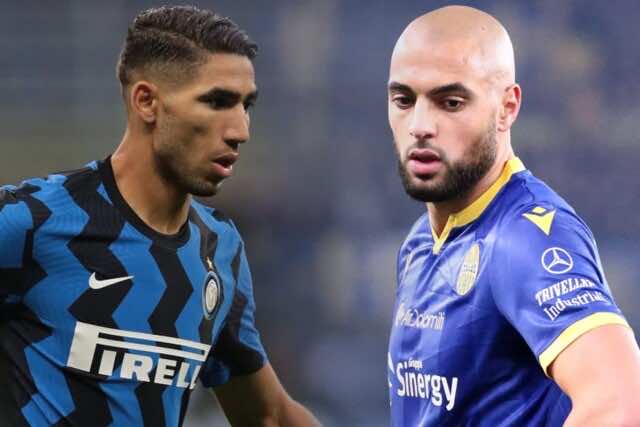 One day earlier, two Atlas lions — Hakim Ziyech and Yassine Bounou — appeared on the first half of the 2020 Best Maghreb Player shortlist.

The four Moroccan players constitute nearly half the shortlist of players competing for the renowned award. The list includes four other players from Algeria and two from Tunisia.

France Football is one of the most reputable sports publications in Europe. It is best known for its yearly Ballon d’Or award, considered to be the most important individual award in international football.

Sofyan Amrabat, the younger brother of fan-favorite Atlas Lion Nordin Amrabat, currently plays for Italian club ACF Fiorentina. This is the first time that Sofyan is a contender for one of France Football’s awards.

The 24-year-old central midfielder began his professional career in the Netherlands in 2015, playing for FC Utrecht and Feyenoord Rotterdam.

In 2019, he transferred to Hellas Verona in Italy, after a one-year spell with Belgian team Club Brugge KV.

His remarkable first season in the Italian football league earned him a four-year contract with renowned local club ACF Fiorentina.

With La Viola, Sofyan Amrabat has so far played 14 games, earning a regular spot among the starting lineup.

“The Moroccan shines with an impressive physical presence in the midfield,” France Football wrote, comparing his clean playstyle to that of the 2014 World Cup winner with Germany, Sami Khedira.

Achraf Hakimi, meanwhile, appears on the shortlist of the Best Maghreb Player award for the second year in a row. Last year, he finished fourth in the rankings.

An important asset for Italian giant Inter Milan, the 22-year-old keeps on improving with every game. He has played 19 matches with his club so far this season, scored four goals, and made five assists.

Internationally, Achraf Hakimi’s position on the Moroccan national team is uncontestable. During the Atlas Lions’ last five games, he scored two goals and made two assists.

“Simply one of the best players in the world in his position,” France Football commented.

While he was unable to earn the 2019 Best Maghreb Player award, Achraf Hakimi has stronger chances this year.

The last time a Moroccan player won Best Maghreb Player dates back to 2017 when the former captain of the Atlas Lions, Medhi Benatia, earned the title.

Anice Badri from Tunisia and Riyad Mahrez from Algeria won the award in 2018 and 2019, respectively. This year might be the opportunity for Moroccans to reclaim the achievement.

The public vote for the award is currently open on France Football’s website. The magazine will announce the results in mid-January, after a second vote by sports journalists from around the world.