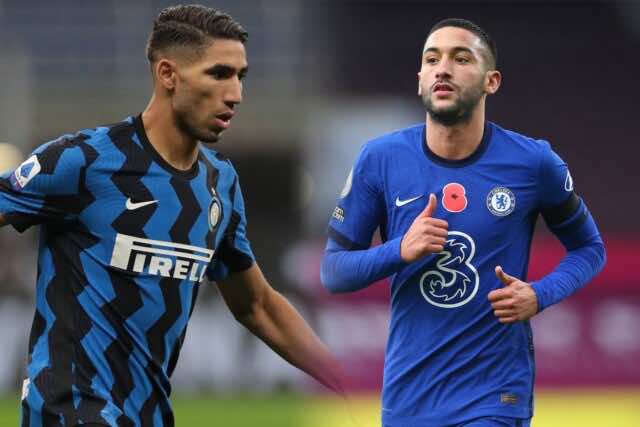 The fictional 11-man squad puts together the best African player in every position.

The 2020 African Team of the Year featured Achraf Hakimi as the best right-back in Africa and Hakim Ziyech as the best central attacking midfielder.

France Football, mostly-known for its yearly Ballon d’Or award, based its “exemplary team” on the evaluations of its global network of sports journalists.

Achraf Hakimi, currently playing for Italian giant Inter Milan, earned the title of best African right-back thanks to his impressive performances both with his club and at the international level.

France Football compared the 22-year-old Moroccan to Cafu, a two-times world cup winner with Brazil, in 1994 and 2002. As well as being the most-capped Brazilian player ever, Cafu is commonly regarded as one of the greatest full-backs of all time.

“The Moroccan Cafu has been incredible since he joined Inter Milan, notably through his offensive contribution (four goals and two assists in seven matches),” the French magazine wrote.

Commenting on his performance with the Moroccan national team — two goals and two assists in the last five games — France Football added: “The Madrid-native calmly led the Atlas Lions to the top of Group E of the [African Cup of Nations] CAN Qualifiers.”

The second Moroccan on the 2020 African Team of the Year list, Hakim Ziyech, earned similar praise.

The 27-year-old transferred this season to English giant Chelsea FC after he made a name for himself with Dutch club Ajax Amsterdam.

“He left Ajax after securing yet another title … In the Premier League, his technical ease quickly shocked people,” France Football wrote.

“Able to dribble, penetrate [defensive] lines, and give the ball wherever he wants, he is a real poison for opposing defenses,” the magazine added.

The French publication also commented on his recent performance with the Atlas Lions — three goals and two assists in the last two games: “A goalscorer, a passer … It seems too easy for him.”

Besides Achraf Hakimi and Hakim Ziyech, the 2020 African Team of the Year featured three players from Senegal, three from Algeria, one from Togo, one from Cote d’Ivoire, and one from Egypt.