Morocco’s King Mohammed VI has granted his royal pardon to 756 inmates in commemoration of the 77th anniversary of the Moroccan Manifesto of Independence.

Most of the pardoned inmates are serving their sentences, whereas some are still being investigated without preventive detention.

493 of the 756 inmates are currently imprisoned with different prison sentences.

The royal pardon for these inmates is as follows:

– 17 of the prisoners are pardoned from their remaining prison terms.

– Life imprisonment changed to a specified time sentence for 1 prisoner.

As for the remaining 263 individuals who are currently being investigated without preventive detention, the royal pardon entails:

– 91 individuals are pardoned from prison punishment or the remainder of their sentence.

– 25 individuals are pardoned from prison punishment but will still pay the fine.

– 138 individuals are pardoned from the fine.

– 9 people are pardoned from both prison punishment and fine.

On 11 January of every year, Morocco celebrates the anniversary of the Manifesto of Independence, remembering the people who fought against French and Spanish colonization.

Last year, the king pardoned 265 people on the same occasion. The number of pardoned people this year is approximately the triple of last year’s pardon.

The 77th anniversary of the Moroccan Manifesto of Independence this year is unique, as Morocco celebrates the independence proclamation and the looming end of a political crisis Morocco has known for decades in its southern provinces. 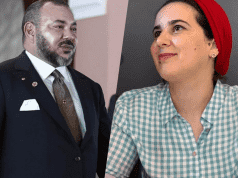