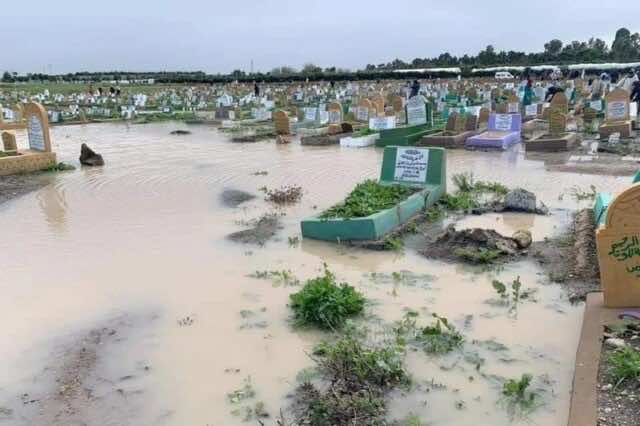 The Al-Ghofrane (Forgiveness) Cemetery, one of the largest cemeteries in Casablanca, has sustained considerable deterioration because of the heavy rainfall that the city has witnessed in recent days.

Photos and videos shared online show that the rain has destroyed and submerged hundreds of tombs. The recent heavy storms have uncovered several tombs and erased some of their name plates.

The situation has caused massive indignation on social media, with many Casablanca residents visiting the cemetery to make sure the tombs of their friends and relatives are intact.

Videos available online show dozens of citizens using basic tools, such as buckets and shovels, to remove water from on top the graves.

In statements to local news outlets, many visitors expressed their sadness and regret about the situation of the cemetery—a place that is nearly-sacred in Islamic tradition.

The tragic situation in the Al-Ghofrane Cemetery, and other cemeteries across Casablanca such as Rahma (Mercy) and Chouhada (Martyrs), was illustrative of the shocking climate-vulnerability of the city’s infrastructure.

For nearly one week, Casablanca has been witnessing floods in several neighborhoods, causing considerable damage to property and claiming several lives.

In the past week, two buildings have collapsed in the city. The collapse of a traditional community oven in the old Medina killed one person and injured three others, while a fallen house in the Hay Mohammadi district claimed three lives and injured four people.

While the heavy rainfall has definitely brought more attention to the vulnerability of cemeteries, citizens have always expressed concern about the graveyards’ situation.

Due to negligence from local authorities, cemeteries across Morocco have turned into a hideout for drunkards and bandits. Citizens have shared their worries about the situation for several years.

In 2014, Morocco’s Ministry of the Interior announced a plan worth MAD 700 million ($79.3 million) to rehabilitate 1,250 cemeteries across the country. The plan is still far from achieving its objectives, however.

In the Casablanca-Settat region, for instance, only 50 cemeteries out of 250 have witnessed some sort of renovation.

Considering the emotional value that Moroccans attribute to cemeteries, the tragic situation these public spaces have reached is intolerable.