Morocco’s national handball team is set to play against Algeria in the first round of the 2021 Handball World Championship. The game will take place tomorrow, January 14, at 6 p.m.

Morocco and Algeria are both part of the competition’s Group F, alongside Portugal and Iceland.

The Moroccan team qualified for the global competition after finishing the 2020 African Handball Championship in the sixth position. Meanwhile, Algeria will enter the world championship as the third-best team in Africa.

The President of the Moroccan Royal Handball Federation (FRMHB), Adil Hanafi, declared that the national squad has fully prepared for the championship and that players are determined to make a convincing performance.

He announced that the training camp of the Moroccan national handball team extended over two months and took place in Ifrane, Morocco, and in Turkey.

The squad played four friendly games before flying to Cairo, Egypt, for the 2021 Handball World Championship.

Morocco’s best performance in the Handball World Championship dates back to 1999 when its team finished 17th in the competition.

Tomorrow’s game against Algeria has the potential to pave the road for Morocco towards a remarkable performance. The match, however, will not be easy, as the Algerian team is one of the strongest in the continent.

After the game against Algeria, Morocco will face Portugal on January 16 and Iceland on January 18.

To qualify for the “main round,” a second group stage with four groups of six, the Moroccan team will have to finish in the top three of Group F.

Finishing in the last position would push Morocco to the President’s Cup, a competition to determine the teams ranking 25th to 32nd in the Handball World Championship. 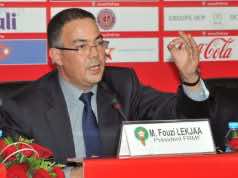