The exercise prepares both navies for future missions to preserve regional stability and security.

This week’s exercises are likely to have included similar naval surface fire training as done in 2019. The USS Porter and the Allal Ben Abdellah are both advanced multi-mission naval ships that can perform similar duties. By training together, the Moroccan and US navy can be better prepared to cooperate in case of a real-life conflict situation.

The Moroccan Navy’s Allal Ben Abdellah is an advanced frigate of the Moroccan Navy’s FMMM-class, referring to Multi-Mission Moroccan Frigates. The Dutch-built naval ship has a helicopter deck and hangar for helicopters and has a variety of firepower available for defensive and offensive operations.

In 2019, the US commander Kelly T. Jones explained that these joint training exercises help prepare for future missions. “We conducted some great training today with the Royal Moroccan Navy,” Commander Jones said at the time.

“We definitely learned from one another and strengthened our partnership,” Jones explained, adding “I look forward to future opportunities to evolve our interoperability with the Royal Moroccan Navy.”

While the US Embassy announced last week’s exercise with the Moroccan navy, it did not specify what type of training the two naval ships had performed. The use of the “Atlas Handshake” name likely means that both ships performed the same “interoperability and high-end warfare” activity as in 2019.

In 2019, the US destroyer and Moroccan frigate performed a “naval surface fire support” training, meaning that they fired at targets on land.  The Aourioura Ordnance Range near Tan Tan is an installation specifically prepared by the Moroccan Navy for such purposes. 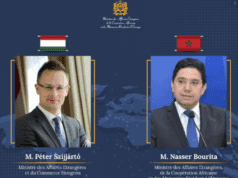 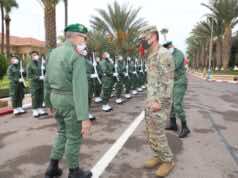