For Hilale, Morocco’s social history is the culmination of cooperation and day-to-day bonds between Amazigh (Berber), Jews, and Arabs.

Morocco’s Permanent Representative at the UN, Omar Hilale, has said that King Mohammed VI is fully committed to preserving the country’s long-standing history of promoting peaceful cohabitation and religious tolerance between Moroccan Muslims and Jews.

A history of cultural cohabitation

Speaking in an interview with Rabbi Arthur Schneier on Thursday, January 14, the Moroccan diplomat and the Park East synagogue Rabbi in New York talked at length about the “Israel and Morocco Reconnect,” referring to the recent rapprochement between Rabat and Tel Aviv.

They commended Morocco’s vision on preserving the country’s Jewish heritage, as well as the historically cordial relationship between Muslims and Jews in Morocco.

Hilale spoke of the centuries-old attachment Morocco has always elicited from its culturally diverse inhabitants, arguing that the bonds and connections even predate the arrival of Islam in the North African kingdom.

“Morocco is the largest place for the Jewish community in the Arab and the Islamic world,” said the Moroccan ambassador.  “The Jewish people are part of our DNA, history, civilization, and past”

Kings of all believers

Hilale also touched upon Morocco’s successive kings’ continuous efforts to protect Moroccan Jews by preserving their rights and cultural identity. He recalled the late King Mohammed V’s historic decision to ensure the protection of Jewish citizens during the Holocaust by refusing to send them to concentration camps in Europe.

“Morocco and the kings of Morocco have been all the time working to protect on one side their community, and on the other side working for peace and building bridges between Palestinians, Israelis, Egyptians and all,” Hilale explained.

Commenting on Morocco’s role and ambitions regarding recent geopolitical developments in the MENA region, Hilale said that Rabat’s only agenda is to make peace. He pointed to Morocco’s history, which he suggested is a perfect illustration of peaceful cohabitation.

For Hilale, Morocco’s social history, which is the culmination of cooperation and day-to-day bonds between Amazigh (Berber), Jews, and Arabs, gives Morocco a working base on which to promote and contribute to cultural openness, religious tolerance, and political dialogue at the regional level.

The ambassador also mentioned Moroccan authorities’ recent initiatives to restore Jewish cemeteries and neighborhoods, including houses in the old cities where the essence of Morocco’s past is still a vibrant part of the present. According to Hilale, Morocco seeks to revive its history in all its dimensions to inspire and guide upcoming generations of Moroccans.

He notably talked about Morocco’s inauguration of “Bayt Dakira” (the House of Memory), the Jewish museum in Essaouira, western Morocco, as well as the recent reform of the education curriculum to include the teaching of Moroccan Jewish culture and history.

Returning to Morocco’s recent diplomatic rapprochement with Israel, Ambassador Hilale said that it should not be seen as normalization — because that means something was not normal before.

Unlike most countries in the region, “Morocco has the history, the people, the links, the religion, and the kings’ responsibility” that allowed the continuation of relations with Israel that were established in the 90s, he noted.

“Today the vast majority of Moroccan Jews live in Israel where they constitute the second-largest community with a population of approximately one million,” he said, hinting at the broader meaning of the recent Rabat-Tel Aviv rapprochement. 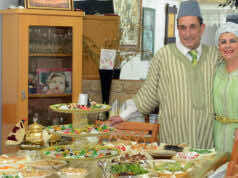