The objective is to ensure a real takeoff of the housing sector as a lever for economic and social development in southern provinces.

Rabat- Morocco’s minister of housing and urban planning Nouzha Bouchareb has announced the government’s intention to give priority to the urban development of southern provinces in 2021.

The minister was hosting a meeting to develop new plans for housing and urban policy in the region of Laayoune-Sakia El Hamra in southern Morocco. Bouchareb said her ministry has taken a set of measures to contribute to the development of the southern provinces. The objective is to ensure a real takeoff of the housing sector as a lever for economic and social development, Moroccan state media reported.

The ministry’s new plan aims to modernize the urban planning sector and ensure its sustainability.  The plan will implement innovative measures that take into account the progress and the growing developments of the region.

Implementing principles of sustainable strategic planning is an essential condition for the social, economic development of Laayoune, added Bouchareb.

She also called for the simplification of bureaucratic procedures in the field of housing in order to improve relations between local authorities and citizens. Bouchareb stressed the importance of preserving historical, urban, and cultural heritage in southern provinces.

The region of Laayoune-Sakia El Hamra witnessed major developments in the housing sector under the “Laayoune city without shantytowns” project implemented in 2008. The efforts resulted in providing housing and land lots for the benefit of more than 32,000 families, and the creation of 17,572 housing units.

In an effort to expand these results, Bouchareb chaired a partnership agreement between the Ministry of National Planning and the local authorities for the urban upgrading of the southern city with a budget of MAD 25 million ($2.79 million).

This convention aims to improve the living conditions of 14,000 families through the upgrading of under-equipped neighborhoods, road construction, development of roadways, public lighting, and development of green spaces.

Meanwhile, the Unified Regional Investment Commission approved some 110 investment projects worth more than MAD 4.53 billion ($4.87 million). These projects would employ an estimated 3,836 people. 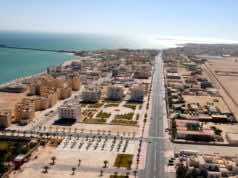