Australia’s Ambassador to Morocco, Michael Cutts, has advocated the exchange of official and cultural visits between the two countries as means of developing bilateral cooperation.

“We can deepen relations between the two peoples of our countries through the exchange of visits between senior officials and ministers, as well as at the cultural level between academics,” Cutts said.

The Australian ambassador gave the statement on Tuesday, January 19, to Morocco’s state media.

In his statement, Cutts highlighted the need for cultural exchange in many fields, such as higher education, research, and cinema.

He recalled his recent visit to the Green Energy Park, a research and development platform in the Green City of Benguerir, 75 kilometers north of Marrakech. During the visit, Cutts discussed Moroccan-Australian academic exchange opportunities with researchers from the institution.

He expressed his satisfaction with such initiatives, arguing that they bring the Australian and Moroccan people closer to each other, despite the geographical distance separating the two countries.

Cutts, who began his mission in Morocco only three months ago, announced that the Australian embassy is actively working on the development of new partnerships with national institutions, notably in the fields of art and music.

The ambassador expressed his hope that the growing cultural cooperation between Morocco and Australia will soon translate into business opportunities, allowing for an increased volume of investments and trade.

Bilateral relations between Morocco and Australia have experienced significant progress in the past few years, especially after the opening of the Australian Embassy in Rabat in 2017.

Based on his statements, Cutts seems eager to build on the achievements of former ambassador Berenice Owen-Jones, whose three-year tenure in Morocco was instrumental in bringing Moroccan-Australian ties to new heights. 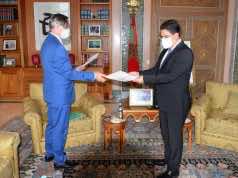