Delegations from Libya’s High Council of State and the Libyan House of Representatives are set to meet in Morocco on Friday, January 22, Anadolu Agency reported today.

Citing a Libyan official, the Turkish newspaper said the meeting between representatives from the two legislative bodies that have been competing for Libya will allow them to discuss appointments to a number of critical leadership positions.

Morocco’s Ministry of Foreign Affairs is yet to confirm the news or share details about the venue and talking points.

News about the upcoming meeting in Morocco come only one day after the Libyan Political Dialogue Forum, composed of members from the rival parliaments, voted in favor of a UN-led proposal. The proposal mainly concerns the mechanism to select Libya’s executive authority for the preparatory period ahead of the national elections set to take place on December 24, 2021.

The upcoming meeting will confirm Morocco’s important role in allowing the efforts to solve the Libyan crisis reach an advanced stage.

Since 2015, Morocco has been at the forefront of countries advocating for a political solution ushered by Libyans themselves, away from foreign intervention.

Morocco’s first major achievement in facilitating negotiations between Libyans was the Skhirat Agreement, signed in December 2015. The agreement put a ceasefire between warring parties in Libya and represented a solid framework for Libyans to negotiate a peaceful solution to their political crisis.

More recently, in 2020, as rival Libyan factions began showing their willingness to compromise and get out of the political deadlock, Morocco hosted a series of meetings between delegations from the High Council of State and the Libyan House of Representatives.

Between September and November 2020, Morocco hosted three sessions of the Inter-Libyan Dialogue in Bouznika, near Rabat. The meetings allowed the Libyan parties to reach agreements on several points of contention, notably the criteria and mechanisms for appointments to leadership positions in sovereign national institutions.

Tangier, in northern Morocco, also hosted a meeting in late November, a few days after the Libyan High Council of State and the Libyan House of Representatives agreed on the date to hold national elections. The date of the elections, December 24, 2021, coincides with Libya’s Independence Day.

The successive meetings indicate that the political crisis that Libya has endured for several years might soon reach an end. 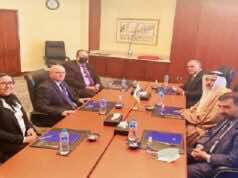