Agadir – Air traffic in Morocco decreased by  71.48% in 2020 compared to the previous year according to the National Airports Office (ONDA). In 2020, Moroccan airports received over seven million passengers, compared to 2019, when Morocco’s airports welcomed  25 million people.

The most popular airport in Morocco was the Mohammed V airport, which received almost half of the country’s total passenger traffic. Over three million people passed through the airport in 2020, a steep decline compared to 2019 when over 10 million people used the airport.

A similar trend was observed in other popular airports, for example the Marrakech Menara airport, which showed a decline of 87.83%, receiving 63,891 passengers in December 2020, compared to 525,179 passengers the year before

Most airports throughout Morocco saw a slump of approximately 70% when compared to the previous year. Among the few notable exceptions were the local airport of Benslimane, which saw traffic nearly double in 2020 and the airports in Laayoune and Dakhla which both only experienced a 50% decrease in traffic.

An interesting comparison can be found in the reduction in international and domestic travel. While December 2020 saw 505,026 international passengers travel through Morocco, in December of 2019, 1.8 million people passed through, a decrease of 71,84%.

Domestic travel however fell less, from 2019’s 245,565 passengers to 117,908 in December 2020.
The decrease of nearly 52% in domestic flights, compared to the steeper decrease in international flights could point to the possible success of various initiatives promoting domestic travel.

The ONDA report also noted that this decline has affected all markets, pointing to Europe, which while accounting for 67% of global air traffic, recorded a decline of 70.47%. 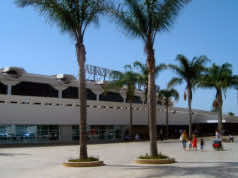